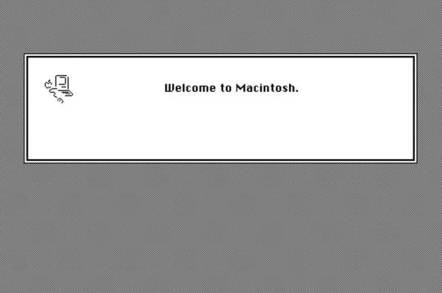 It is 35 years since computer buyers were first able to take a glimpse into a fruity future without having to remortgage for an Apple Lisa. Happy birthday, Mac.

After the disastrous debut of the Lisa, and the abject failure of the Apple III, it was down to the Steve Jobs-led Macintosh project to save the day for the troubled computer manufacturer. Rival IBM had launched the Personal Computer XT just under a year earlier, in March 1983, with up to 640KB of RAM and a mighty Intel 8088 CPU. It also included PC-DOS 2, which would go on to underpin Microsoft's operating system efforts in subsequent decades.

IBM had started to rule the PC industry, but what the IBM PC XT did not have was a graphical user interface, sticking instead with the sober command line of DOS.

The Macintosh, on the other hand, had a GUI lifted from Apple's ill-fated Lisa project, except (and unusually, as things would turn out) retailed at a lower price of $2,495 (just over $6,000 in today's money). It ran faster than the Lisa too, with its Motorola 68000 CPU clocked at 7.8MHz.

The good news ended there. The machine shipped with a woeful 128KB of RAM, which was shared with the black and white 512 x 342 pixel display built into the box. That 128KB was resolutely not upgradable, and fans would have to wait until September for Apple to unleash a 512KB version for another $300.

The only storage provided was a single 400KB 3½-inch disk, an improvement over the 360KB 5¼-inch floppies of IBM's PC XT and the nature of the box meant that any extra storage would have to be external. Users became quickly accustomed to swapping floppies in order to do what little useful work the pitiful 128K would afford.

Third parties eventually launched hard drives for the machines, which had to be attached via the serial port. Apple would make a 20MB drive in the form of the Hard Disk 20 available in September 1985 for the 512KB Mac at a cost of $1,495. Owners of the original 128K Mac, however, needed not apply. The limited RAM made the new Hierarchical File System a non-starter.

And that RAM? In an interview with BYTE back in the day, Jobs and co demonstrated the famed reality distortion field was already in operation with the assertion that the Mac was really a 192KB machine because Apple had shoved 64K of "the tightest, most elegant code that this company has ever written" into ROM. The DOS of the PC XT, in comparison, would chew through IBM's RAM.

Reality would, however, bite before long and with the majority of software soon needing the headroom of 512K, the 128K version saw an improved motherboard to permit RAM upgrades. Early adopters of the original Mac were offered what was effectively a motherboard replacement at a cost of $995 to make their 16.5lb plastic boxes more useful.

Unlike the Lisa, the Mac lacked expansion slots and had no user-serviceable parts inside. Only approved Apple engineers were permitted to poke around the thing's guts, including fitting the aforementioned upgrade (which effectively turned a 128K Mac into the 512K version).

Software-wise, Finder 1.0 put in an appearance as part System 1.0. It would receive a rapid maintenance update in the form of System 1.1 in May 1984 and support for multiple folders in the System 2.0 of April 1985. Hard drive support (and Finder 5.0) turned up in September 1985's System 2.1, but the days of support for that original 128K Mac were very much numbered. System 4.0 officially dropped support for the beige box in 1987.

While visually flashy, with menus, windows and a funky mouse-pointer, System 1.0 could only run one application at a time (let's face it, that 128K would have struggled with much more) and it would be some time before the advances of the earlier Lisa OS would make it into the Mac world.

Launched with a Ridley Scott-directed "1984" commercial, which poked fun at the dominance of IBM and its ilk in the business world, the machine sold relatively well and better than the earlier Lisa. Jobs, however, left the company in 1985.

Even with a woeful amount of RAM, and only a limited line-up of productivity software at launch – although Microsoft was quick to support the thing with Word and Excel – the Mac will be remembered for changing how users interact with computers.

Assuming their pockets were deep enough. ®