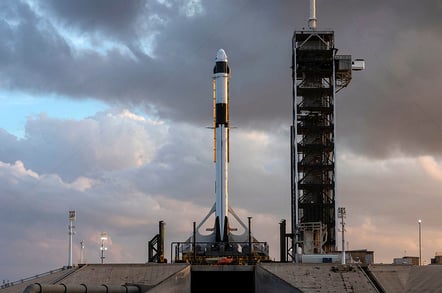 SpaceX has finally fired up the engines of the Falcon 9 that is tasked with carrying the company's Crew Dragon spacecraft on its demo flight.

The Merlin engines fired for around three seconds by our reckoning (the video is below for those bothered enough to count), which is a little shorter than usual.

The Static Test Fire took place yesterday on Kennedy Space Center's pad 39A, which is leased by SpaceX. The pad, which has its roots in NASA's Apollo heyday, saw the final launch of a Space Shuttle in 2011. Almost two years ago it supported its first SpaceX launch, CRS-10, to the International Space Station (ISS) and nearly exactly a year ago hosted the first SpaceX Falcon Heavy launch.

Much of the infrastructure required for the Space Shuttle has been removed over the years, with the famous Rotating Service Structure (RSS) used to cover Shuttles stripped out as was the crew access arm. The remaining structure has been repainted in a fetching shade of black and SpaceX has fitted its own sleek walkway for hopeful 'nauts to cover the final metres to a waiting Crew Dragon capsule.

While the test itself occurred at 2100 UTC, SpaceX didn't actually confirm it until some hours later, a clue to the scrutiny the company is under for this most critical of launches. A launch would normally follow a week or two later. For example, the Falcon Heavy had its engines fired up a year ago (on 24 January 2018) and launched just under a fortnight later on 6 February 2018.

The Crew Dragon is likely to spend a bit more time waiting for its turn. The launch date has enjoyed a relentless march to the right, with mutterings circulating that 23 February is now in the frame. That date could easily slip deep into March if the ISS partners get twitchy about SpaceX's Demo-1 mission turning up at around the same time as a Soyuz and, er, a SpaceX cargo Dragon.

SpaceX supremo Elon Musk told his devoted Twitter following that if all goes well, pad 39A might see a crewed flight once more by the summer.

After a multi-year delay, what's a few more weeks between friends? ®