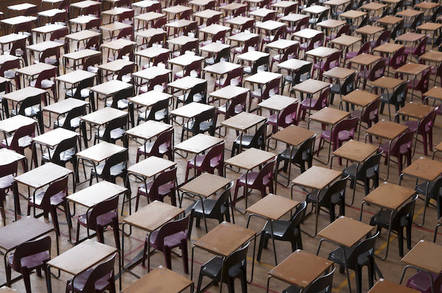 GCSE computer science will be exam-only, the UK's education watchdog has said, after concluding it isn’t possible to fairly and reliably assess the secondary school qualification any other way.

Ofqual consulted on the planned changes to the GCSE, to be in place for those sitting exams in 2022, last year and has now confirmed it will be implementing its preferred option.

That will see programming skills assessed only via examination – although Ofqual said it wasn’t specifying the details of the exam, in a bid to encourage exam boards to “innovate”.

The body was pushed to action after an incident in 2017, when both teachers and students were found to have chatted online about a set of confidential programming tasks that should have been carried out over 20 hours in controlled conditions.

In the short-term, Ofqual scratched programming skills from the formal marks for the qualification, but wants to reinstate them to reflect their importance.

This will see students’ ability to “analyse problems in computational terms to make reasoned judgements and to design, program, evaluate and refine solutions” make up 30 per cent of the final grade.

There will also be a requirement on schools to issue a statement that confirms that students have been given the chance to design, write, test and refine programs as part of their course of study – seen as a driver to ensure students will be properly prepared for the exams.

The consultation considered three broad approaches to assessing programming skills: through a non-exam assessment, a separately reported grade in addition to the GCSE 9-1 grade, or an exam.

“We have concluded that assessing programming skills under exam conditions will ensure that outcomes in this qualification can be trusted and that all students are assessed on a level playing field,” Ofqual said in its decision (PDF).

The majority of the 394 responses were in favour of Ofqual's preferred approach, it said, with support being particularly strong among teachers, who argued extra safeguards put in place after 2017 had prevented them from offering support to students or discussing tasks with colleagues.

Ofqual acknowledged that typical working practices – such as collaboration or reference to code repositories – wouldn’t normally be allowed in exams, but that “there are many subjects where the established form of assessment does not reflect how the skills… might be used in real-life contexts”.

It also argued that even respondents who didn’t think an exam was the best way to assess programming skills felt it was ultimately the best way to ensure the most valid outcomes.

Other respondents felt that exams wouldn’t measure the creativity that might be encouraged during longer projects, but Ofqual said that boards could develop extended assessments, online or on-screen exams, or use pre-release material, or access to “approved” resources or repositories.

The body was keen to emphasise that beyond the requirement the assessments would meet its definition of an exam, which it said would allow exam boards to adopt different approaches “and potentially to introduce innovative approaches within this qualification”.

Meanwhile, students were said to be particularly concerned that if schools weren’t required to submit the course content statement, “they would not be taught this aspect of the course in sufficient depth”.

Other concerns, such as on the impact on the IT resources at education centres and on special education needs students, were also considered, but Ofqual said it was satisfied that the proposals wouldn’t have a negative impact in these areas. ®

Brit watchdog considers changing how course will be graded

Put down your ironing and get to the keyboard!

That new 'Microsoft GCSE': We reveal what's in it

What the Windows 8 maker wants Brit kids to know