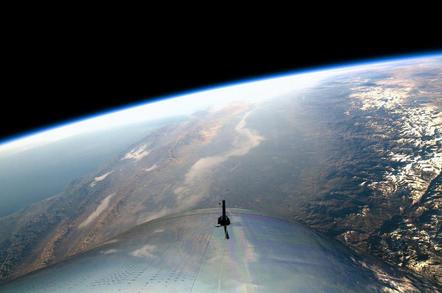 Fresh from its successful jaunt to space, Virgin Galactic has clambered into a pair of sweatpants with sportswear firm Under Armour.

Under Armour, notable for flogging premium exercise clothes to people unlikely to see the inside of a gym any time soon, is now the "Exclusive Technical Spacewear Partner" for Richard Branson's rocket jockeys.

Virgin Galactic's SpaceShipTwo thundered to 82.7km above Earth in December 2018, reaching space for the first time (depending on your definition of where space actually starts.)

It is unclear if the pilots were wearing Under Armour garments during their achievement. We can but hope that they were clad in sturdy underwear of some description – firing up the rocket motor of SpaceShipTwo for the 30 seconds it took to accelerate the craft to Mach 2.9 would leave our sphincters worryingly loosened.

Virgin's pilots have a few more flights to go before the Bearded One will take to the skies on a sub-orbital lob, garbed in the specialised apparel and footwear.

While Virgin Galactic describes the outfits as "space suits", the Under Armour-designed clothing will only "maximise personal performance" so long as the wearer remains inside SpaceShipTwo at all times.

According to a representative we spoke to, any foray into actual space wearing the things would be shortlived since similarities between the final design and the pressure suits normally worn by 'nauts are purely cosmetic.

The expectation is that the robust hull of SpaceShipTwo will hold pressure during the sub-orbital jaunt, allowing its well-heeled passengers to enjoy the feeling of trendy sportswear rather than the claustrophobia of a Shuttle-era pumpkin Launch Entry Suit or Russian Sokol.

SpaceX and Boeing both have their own take on pressure suits and, of course, Russia has insisted Soyuz crews wear the Sokol since 1973, after the tragedy of Soyuz 11's depressurisation in 1971.

Under Armour will be dressing pretty much everyone involved in Virgin Galactic's endeavour, from passengers and pilots to the team watching the screens in Mission Control. The outfits will be specially chosen, according to the space-bound outfit, to, er, "enhance performance and to provide a tangible sense of shared purpose".

Under Armour also intends to design fitness and nutrition programmes to prepare wannabe 'nauts and ensure they "feel good and look good during this unparalleled life experience".

Hopefully they're also wipe-clean. This Vulture has spent some time in microgravity and can confirm that things can get a bit... splashy. ®