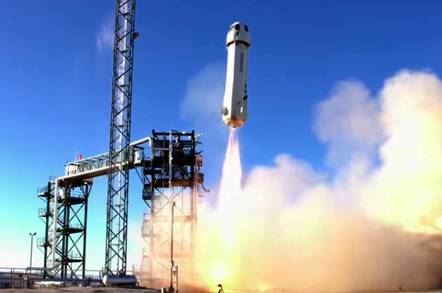 The 18-metre-long cargo craft took off from Corn Ranch, a spaceport in Van Horn, a town in western side of Texas, at 0708 PT (1508 UTC). It marked the Amazon supremo's tenth Blue Origin test flight. The rocket reached a height of 66 miles above Earth's surface, and quickly returned to its landing site, touching down in one piece under its own power.

Here's a replay of the launch. Skip ahead 40 minutes to the dramatic two minutes to T-Zero...

Meanwhile, an empty passenger capsule separated mid-flight, and continued upwards before floating back to terra firma using three parachutes, setting down intact. This launch was thus a test to see if Blue Origin can safely execute its business plan: it intends to eventually take moneybags tourists to the edge of space and back home again, so they can pretend to be astronauts.

Besides testing its rocketry hardware and launch processes, eight scientific experiments from NASA’s Flight Opportunities Program were aboard to take readings. This equipment included an apparatus to measure the electromagnetic fields inside and outside the rocket, plus kit to analyse samples of dust carried up into space to see how the particles behaved in micro-gravity.

The ultimate goal for horndog millionaire Bezos, as we said, is to develop a commercial space service to shuttle humans back and forth between the fringes of the obsidian heavens and the solid ground of Earth, our tiny fragile blue marble in a quiet neighborhood of the Milky Way.

Sly rival SpaceX couldn't help but poke fun at the Blue Origin tests, though, and at how much more work is needed to be done by Team Bezos, just ahead of this week's takeoff:

Dragon has delivered more than 140,000 lbs of cargo to and from the @space_station since 2012, but it was designed from the beginning to carry humans. These critical resupply missions also provide important flight heritage as we prepare to fly Crew Dragon. pic.twitter.com/xOSKhWr0Kq

Not that SpaceX had that much to brag about today. Elon's Musketeers' shiny toy, dubbed Starship and formerly known as the BFR, suffered a serious mishap.

A stainless steel prototype of the shuttle was knocked over by powerful gusts of wind, and will take a few weeks to repair, Musk said on Twitter. The nose section looks like it's completely knackered, though the motors and fuel tanks appear undamaged.

I just heard. 50 mph winds broke the mooring blocks late last night & fairing was blown over. Will take a few weeks to repair.

Here’s a picture of the fallen Starship Hopper, having tumbled down like the share price of Musk-owned Tesla this week:

Whoops. Starship Hopper nosecone has been blown over in high winds.

Starship Hopper was built to test rockets that will eventually, it is hoped, fly folks to the Moon and Mars. Japanese tech billionaire Yusaku Maezawa is set to be the first paying customer to journey to Earth's satellite by 2023 using SpaceX hardware. Good luck with that. ®