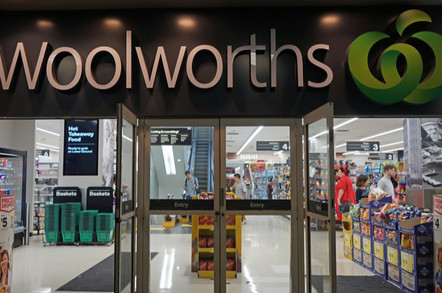 I'll take a packet of crisps, and - what the heck... some lahvley nbn fibre... Pic: Catrin Haze / Shutterstock.com

In one of its first major wins in the enterprise market, NBN Co** has confirmed it will pull fibre to Woolworths' properties in support of a Telstra contract with the supermarket giant.

In an email to The Register, nbn™ confirmed this, and noted the importance of the business segment as a revenue driver.

Securing business services is vital to NBN Co because its business plan rests on being able to achieve monthly average revenue per user (ARPU) of AU$52 (about £28, $37) by 2022, but consumer ARPU remains stubbornly stuck around the AU$44 (£24, $31) mark.

Telstra, the retailer in the arrangement (and therefore the company providing services), has long handled Woolworths' networking.

The move is interesting because NBN Co is forbidden from direct competition in the business market.

Given Telstra's own extensive fibre network, it may have been more natural for the carrier to have pulled its own fibre to the retailer's stores via InfraCo, the spin-out now in charge of physical assets not associated with its mobile networks.

When InfraCo was announced, we noted that one of its revenue sources is as a build contractor for NBN Co.

In other words, it's not out of the question that Telstra will buy fibre networking from NBN Co to connect Woolworths locations, and NBN Co will buy build services from InfraCo.

Earlier this week, NBN Co launched an effort to boost 100Mbps takeup. Retailers who get users signed on for the faster connection will, under a program called "Forward and Fast Anytime 100 Rebates", get $160 per customer.

The rebate list [PDF] shows that the offer is available to all customer plans 25Mbps downstream and higher. That's good news for customers with fibre, HFC, or fibre-to-the-basement/curb (FTTB/C) services, but 100Mbps services are less achievable on FTTN (Neighbourhood) connections.

**In 2015, NBN Co decided it needed a logo refresh and swapped to nbn™, a move that cost it $700,000. The logo retains the nbn™ branding, but perhaps because so many people (politicians included) kept calling it "NBN Co", its staff have returned to that usage in emails.