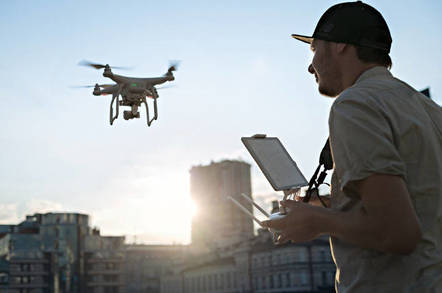 Flying high ... A drone in the skies (Dramatization. May not have happened)

It seems the UK's latest pain-in-the-ass craze has made its way stateside again, as alleged sightings of rogue drones brought Newark Liberty International Airport to a halt Tuesday.

Officials at New Jersey's largest airport said it temporarily stopped air traffic in the early evening after flying gizmos were apparently spotted flying over Teterboro airport, a small facility about 15 miles to the north of Newark. And before you ask, no, we haven't seen any confirmed footage of the devices yet.

Newark staff said that by about 7pm US Eastern Time the drones had apparently sodded off, and normal operations were resuming, though travelers can expect slow going due to a backlog of flights.

Normal #EWR operations have resumed after arrivals were briefly held by the FAA due to reports of drone activity north of the airport earlier this evening. We’re coordinating with the FAA & fully supporting all federal law enforcement authorities as they investigate this incident

According to news reports, two drones were spotted flying over Teterboro at an altitude of around 3,500 ft, prompting America's aviation watchdog, the FAA, to temporarily halt air traffic at Newark until it could be confirmed that there was no danger of drones interfering with incoming or outgoing planes.

The incident comes on the heels of two similar airport shutdowns in the UK. In December, confusion over a drone sighting at London Gatwick airport resulted in more than 100,000 travelers being stranded just days before Christmas.

A couple weeks later, another drone scare shut down traffic at Heathrow Airport for several hours.

Hopefully, the New Jersey sighting will be a one-off, rather than the first in a wave of copycat drone flybys at US airports. The last drone menace we can recall affecting a major American airport was the one in 2015 in Texas. ®