Pay no attention to Watson's lackluster performance – look, the share price is up! 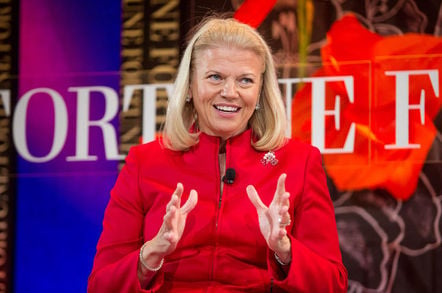 IBM on Tuesday delivered its third consecutive quarter of declining revenue, and its shares still surged in after-hours trading.

Big Blue reported $21.8bn in Q4 2018 revenue, down 3 per cent year over year or 1 per cent in constant currency. The numbers were better than the average analyst estimate of $21.75bn, which explains investor enthusiasm for IT giant.

"In 2018 we returned to full-year revenue growth, reflecting growing demand for our services and leadership solutions in hybrid cloud, AI, analytics and security," said Ginni Rometty, IBM chairman, president and CEO, in a statement, claiming interest from large global customers in IBM's cloud tech and its business services.

IBM's cognitive solutions group, which includes AI and analytics software, barely budged, with $5.5bn in revenue. That's about the same as the year-ago quarter or up 2 per cent adjusted for currency.

The company's technology services and cloud platforms group posted revenues of $8.9bn, a 3 per cent decrease or flat year to year in constant currency. Even so, gross profit margin rose 140 basis points.

"This is the most successful mainframe product cycle in quite some time," said CFO Jim Kavanaugh during the company's conference call with financial analysts.

Finally, the company's financing group reported $402m in revenues, down 11 per cent or 9 per cent with currency adjustment.

In an email to The Register, Forrester Research VP and principal analyst Andrew Bartels said the results look like the more mediocre news from IBM. "The 12 per cent cloud revenue growth [for the full year] is not impressive, given that IBM tosses anything cloud related into that, including sales of hardware that might be used for cloud operations," he said.

Bartels also found the performance of IBM's AI and analytics business underwhelming, noting that its cognitive solutions sales grew a modest 2 per cent when the overall software market is growing at about 8 per cent. "Watson is clearly not providing the lift to IBM's revenues as it had hoped," he said.

Bright spots for IBM, Bartels observed, include growing demand for global business services and stronger profits due to a focus on growing earnings per share rather than revenues.

The company's $34bn acquisition of Red Hat is expected to close in the second half of 2019. Kavanaugh said he's excited about what Red Hat and IBM together will mean for customers.