Q. China just landed on its far side, the US woz there 50 years ago – now Europe wants to mine it? A. It's the Moon 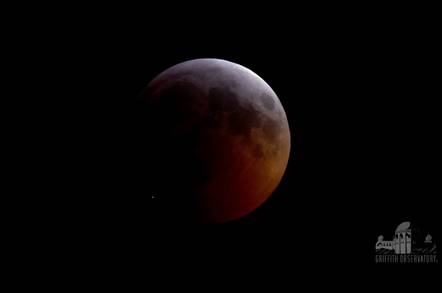 Tiny white spot in the bottom left-hand corner of this Moon snap may have been caused by a meteoroid ... Image credit: Griffith Observatory, USA

Pic Within the next six years, the European Space Agency hopes to drill into the Moon and extract oxygen and water, paving the way for folks to eventually live on the rocky satellite.

The ESA this week signed a one-year contract with ArianeGroup, an aerospace biz specializing in space rides and ballistic missiles, to bring the project to reality. The goal is to shoot an Ariane-64 rocket carrying all the drilling equipment needed to the Moon before 2025.

ESA helped fund the development of the Ariane-64 rocket, coughing up €2.4bn (£2.1bn, $2.7bn) for two different configurations: the Ariane-64 and Ariane-62 based on the 2014 Ariane-6 blueprints. Equipped with two or four solid fuel boosters, the Ariane-62 and 64 rockets, respectively, use liquid fuel for their core and upper stages. The Ariane-64 is expected, for one thing, to carry payloads of up to 11,000 kilograms (24,000 lbs) to geostationary transfer orbit. The first test flight is hoped to blast off in 2020.

“The use of space resources could be a key to sustainable lunar exploration and this study is part of ESA's comprehensive plan to make Europe a partner in global exploration in the next decade,” said [PDF] David Parker, director of human and robotic exploration at ESA.

The lunar regolith is said to contain oxygen and water, and finding out if there's enough of both life-essential substances is vital if folks are to eventually live and work on the Moon. It's these materials that the Chinese and US are looking for as well, which could lead to an interesting 2020s space race.

Hang on, was that a meteoroid smashing into the Moon during the total lunar eclipse?

The Moon’s surface, is, in fact, used to taking a pounding from alien visitors: meteoroids often slam into it. Earth got a grandstand view of this during the total lunar eclipse last weekend, when multiple cameras spotted a bright spot emerge on the lunar surface that disappeared almost as soon as it was clocked.

“Well, what we have here is that a number of people were recording the total lunar eclipse on Sunday and spotted a flash right at the beginning of the totality of the eclipse,” Anthony Cook, an astronomical observer at the Griffith Observatory in Los Angeles, California, told The Register.

"These have been observed before and even confirmed by the Lunar Reconnaissance Orbiter as bring impacts from meteorites."

NASA’s Lunar Reconnaissance Orbiter (LRO), an orbiting probe mapping the Moon, has snapped pictures of new craters created by meteoroid impact events. Cook said that it’d take months to fully confirm if the flash was caused by a meteoroid vaporizing as it hit the Moon.

“The Moon is probably getting pelted with stuff every few hours. Amateur astronomers will quite often see these flashes during meteor showers when lighting is favourable, when it’s close to new moon and with the dark side facing us,” he added.

“What we don’t know is how large the object is. It’s pure speculation, but I wouldn’t be surprised if the meteoroid was about the size of an apple. It all highly depends on how fast it was travelling, but something the size of the apple could make the flash seen from Earth and could probably make a crater as wide as a meter more.” ®