Surface: Tested to withstand the NFL. Microsoft firmware updates? Not so much

Windows is updating your play-by-play, this may take a while 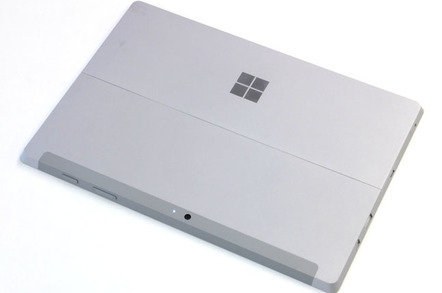 Foldable and flingable. The Microsoft Surface

Microsoft's Surface tablet got an unexpected workout during the recent NFL playoff between the New England Patriots and the Kansas City Chiefs when a frustrated coach flung the fondleslab onto the field.

The way he flung it will be familiar to owners still battling machines borked by flaky firmware.

Microsoft has spanked millions on getting its premium devices into the mitts of American handegg bosses. Frustratingly for Redmond, however, commentators and participants kept referring to the things as "iPad".

More recently, Microsoft has stuck the Surface branding front and centre so there can be no doubt as to the devices' provenance. Even when they are rebounding from a hard surface.

For the benefit of European readers, NFL is the National Football League. It's a bit like rugby, except players wear all manner of protective gear, doubtless padded with the dollar bills showered on the sport.

Microsoft Surface supremo Panos Panay reassured worried Surface fans that the device had been tested "for this exact scenario". Cue a line of fondleslab users disappointed their own devices had not survived their own unplanned encounter with the ground.

If only Microsoft thought of the scenario of Surface Pro 4 users applying firmware updates in its testing plans. The company might have been spared the 65 pages of wailing from users following an unfortunate update over the summer.

While Microsoft has remained silent on the issue, afflicted Surface Pro 4 users have reported success with Microsoft Support by quoting the support thread in question and allowing operators to have a crack at replacing the borked drivers. After the inevitable failure to fix the problem, customers have reported replacements being authorised.

The Register has contacted Microsoft for an official statement on the situation, but we're not holding our breath.

As for the NFL incarnation of the Surface, while many suspect some aspect of the play angered New England Patriots coach Bill Belichick, our best guess is that Windows decided it was time for an update just as the game finally got interesting.