We'll know for sure when Huawei reveals a shoe-shaped smartphone 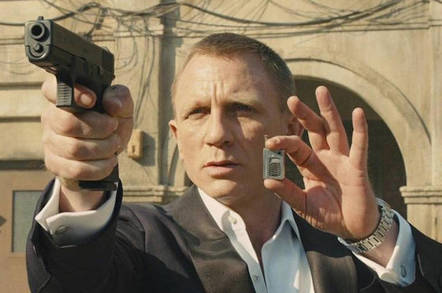 Something for the Weekend, Sir? The name's McLeod. Alessandro McLeod. I am a spy for the secret services.

You must now be assuming I must be pretty rubbish at this secret agent thing if I'm telling you this here, rather like the way Kelvedon Hatch isn't terribly adept at being a secret nuclear bunker.

Not to worry, I'm not spying for the British Secret Services anyway, I'm doing it for China. It turns out that it's really easy to do. As I understand it, all you need to get into the spying game on behalf of everyone's favourite inscrutable superpower is to own something with a Huawei logo on it.

How did I get into the spying game? Well, it was a case of accidental entrapment. More than a year ago, Huawei decided to release its Mate 9 series handset with a soft launch targeted at raising the brand's status in Western Europe via social media rather than bothering with the hated mainstream IT press. Unfortunately for them, however, Huawei accidentally added The Reg's Andrew Orlowski and me to the list of carefully selected online influencers (ie, friendless nobodies) when trying to fill empty seats in the auditorium.

Yes, auditorium. Huawei's idea of a "soft launch" is to invite several thousand blaggers to an aircraft hangar-like conference centre in Munich to experience a spectacular light show, blaring music and acrobatic dancing girls as the company's Consumer business group CEO Yu Chengdong arrives onstage in a Porsche. Tim Cook he is not.

By coincidence, my Apple iPhone 6s was stolen exactly a month later. Huawei's Mate 9 review test unit duly came back out of its box and became my main handset until I'd bought a new iPhone…

…which of course I never bothered to do because Huawei never got around to asking for its Mate 9 back. At the time, I got the impression the company lost interest in its Mate 9 series about 17 seconds after the Munich launch event ended, turning its focus already to its imminent replacement, the Mate 20.

Gosh, I thought, nobody has ever failed to ask me to return their review kit before. Usually, manufacturers insist I pay the return courier fee too, then threaten me with legal action because I didn't write a shamelessly sycophantic review showering the product with unwarranted five-star praise (ie, like an influencer). I thought to myself: they must do things differently in China. I like that.

Looking in hindsight, this was just all part of their intricate plan to entrap me in a devilish web of data espionage. First, I receive a Huawei smartphone to test even though I never requested one; second, my own iPhone gets stolen in suspicious circumstances (come on, who gets their phone nicked while sitting on a beanbag in the middle of an art installation at Tate Modern?); third, I find I am still using the Huawei loan unit more than a year later. What can I say? It's a good Android smartphone.

Since then, the US government has condemned the use of Huawei equipment by telecoms companies, hinting that it has something to do with national security but without explaining what. The Pentagon banned its staff from using Huawei handsets or and ordered US military bases to stop selling them. US commerce delegations then did the rounds of European allies, trying to persuade local telcos from installing Huawei kit into their forthcoming 5G network infrastructure.

The US has also accused Huawei of breaking internationally agreed embargos on shipments to North Korea and Iran. Of course! Now it all makes sense! Remember when Paul Simon's 1986 album Graceland broke the cultural boycott against South Africa? Clearly he was a communist China stooge too, having recorded an earlier hit with Art Garfunkel called Cathay's Song.

Personally, I think it would be a shame if I suddenly found my phone no longer worked because my network provider introduced some Huawei-blocking tech. This partly because, as I may have mentioned in this column before, Mme Dabbs likes to refer to the company as "Wha-hey", which always raises a smile because of its Carry On movie connotations.

"Could you grab your Wha-hey and bring it over here?"

"I can't concentrate on TV because your Wha-hey keeps buzzing."

"Is that a Wha-hey in your pocket or are you just pleased to see me?"

The other reason I'd be unhappy to part with my Huawei is that being told it's a spy gadget for the Chinese secret services is absolutely thrilling. When I had an iPhone, I was just a sad, overcharged Apple fanboi. With a Huawei, I'm James fucking Bond.

Except, of course, I'm not James Bond. Nor Alistair Dabbs for that matter. As far as Huawei's Chinese data servers are concerned, I am Alessandro McLeod and I am a 107-year-old woman living in Greenland. I hope the People's Liberation Army makes good use of this valuable information, not least because it'll have changed again by the time you read this.

Whatever Huawei is supposed to be doing secretly remains vague but I am assured it is jolly naughty. My understanding is that my data could be being slurped, my personal information sold on without my permission or knowledge, my social networks infiltrated, my on-screen ads configured to manipulate my political opinions, and possibly the device is even listening to my conversations when I'm not making a phone call.

Er… hang on, isn't that what Google, Facebook et al have been doing for years already? Ah, but these companies are American! They would never misuse the personal information of citizens. They would steadfastly refuse to bow to the political demands and censorial whims of despotic governments and vested financial interests.

It's difficult to pick a national side in the Huawei confrontation when you're neither American nor Chinese. You're all bally foreigners as far as we in Brexit Britain are concerned, and you are not to be trusted.

Miss Moneypenny, grab my Wah-hey would you? I feel a vibrating alert coming in from the Far East.

Alistair Dabbs is a freelance technology tart, juggling tech journalism, training and digital publishing. He actually couldn't give two hoots about which handset he might use in the 5G future, as long as it's not a Samsung. A return to iOS is equally unlikely, at least at current prices thanks to Apple greed and crappy Brexit-induced sterling exchange rates. @alidabbs