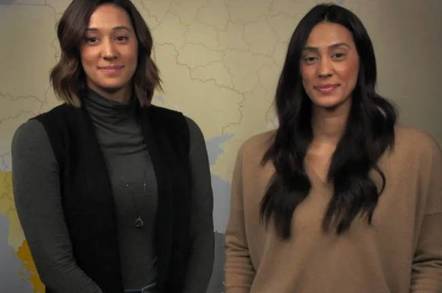 Updated Mail-order genetic testing kits, which are all the rage right now, have been put through their paces by identical twins, and the results are a little baffling.

These test kits collect your DNA, typically by you spitting into a tube, and then you have to send the package back to the manufacturers for analysis. The results are shared electronically when ready.

To check out the accuracy of these test kits, Charlsie Agro – who fronts Canadian telly watchdog show Marketplace – and her identical twin sister Carly used them to submit their DNA to five separate consumer-grade genetic-testing outfits, and compared their results.

Two of the tests reported that the twins had no Middle Eastern ancestry, while the three others did, with FamilyTreeDNA saying 13 per cent of their sample matched with the region.

On top of this, each test couldn't quite agree on the percentages between the sisters, which is odd because the twins share a single genetic profile. In other words, each of the tests should have come back exactly the same for the pair. From 23andMe, though, Carly's result stated she is 13 per cent broadly European, while Charlsie was said to be just three per cent.

Each of their percentages were otherwise up to a few points out between them. For instance, 23andMe suggested Carly is 25 per cent Eastern European, while Charlsie is 28 per cent. Boffins at Yale university, having studied the women's raw DNA data, said all the numbers should have been dead on.

"Despite having virtually identical DNA, the twins did not receive matching results from any of the companies," the investigative team noted in their report this week.

"In most cases, the results from the same company traced each sister's ancestry to the same parts of the world — albeit by varying percentages," they added. We note that, according to their family, the sisters' ancestors hailed from Sicily, Poland, and Ukraine.

El Reg asked each of the manufacturers in the report for an explanation, and we have yet to hear back.

That the identical pair would have slightly different genetic profile results is not exactly a shock. These borderline-novelty mail-order genetic tests are not a precise DNA study, certainly not up to the level of analysis you'd expect from a medical or forensic lab.

Depressed? Desperate for a ciggie? Blame the Neanderthals

The discrepancies may stem from a lack of proper testing. A DNA sample is typically made up of around three billion base pairs, though off-the-shelf gene kit testers usually only look at around 700,000. And each test kit maker probably uses their own proprietary software and datasets to determine someone's ancestry from their genes.

Back in 2013, sales of genetic tests were temporarily halted by America's drug watchdog, the FDA, and manufacturers are still limited in what they can report, such as restricting them to suggesting potential hereditary health risks rather than coming to outright conclusions on any medical conditions.

At the same time, commercial DNA tests are being used by law enforcement agencies as a means to help generate leads in criminal investigations, most famously in the 2018 arrest of the alleged Golden State Killer, who was apprehended after a relative's DNA test was apparently found to match samples found at a crime scene. ®

Ancestry got back to us with a long statement that did not address any specific points raised by the Marketplace twins report. "Genomics is advancing rapidly, and as an industry leader Ancestry remains committed to investing in and creating ‘what’s next’," was the most coherent sentence a spokesperson could give us.

A spokesperson for 23andMe declined to comment on the record. Separately, we understand the biz uses algorithms to essentially guesstimate the percentages of a person's ancestry, leading to differing values between, in this case, identical twins. That, to us, sounds like a bug in its software.