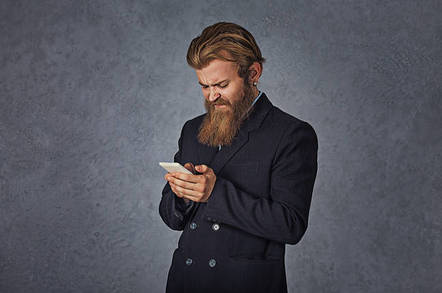 What has happened to my app?

Hipster laptop lids are in for a scraping as messaging-for-millennials platform, Slack, has taken a beating with the rebranding stick.

And it's going as well as you might expect.

A blog posting on the company's site insisted that this isn't just "change for the sake of change" but was instead an evolution that would do the job better.

As it peered nervously over its shoulder at the relentless march of Microsoft's Teams, Slackers worried that the 11 different colours and precise 18 degree rotation of the original logo made it too easy to get the branding wrong, which would be just awful.

And so the familiar hash (no, we shan't call it a "pound sign" because we are British and keeping £ on keyboards has caused enough trouble over the years) has been retired in favour of… this.

Naturally, such creativity required many in-house designers and brand botherers. The company even outsourced some of the effort to external agency Pentagram. The result, according to the designers, is something the captures Slack's "simplicity and ease of use".

The online community has reacted in its usual, measured way.

One wag pointed out a distinct duck resemblance, perhaps stitched together in a horrifying waterfowl-based version of the Human Centipede.

There is also, alas, a similarity to the Google Photos logo and, really, plenty of others. More distressing is the suggestion that the imagery could put users in mind of a whimsical, rainbow swastika.

Not really what the gang at Slack were going for.

Slack is facing increased competition from the likes of Microsoft's Teams as the Windows giant continues to make strides in persuading users of its Office 365 suite at least that Redmond's own collaboration platform is the thing to use.

For today however, the team at Slack has opted to fiddle with branding rather than deal with that threat head on.

But at least there's a shiny new logo to look now, right? ®