Trump, communism and 5G - a rare glimpse into the founder's past and present 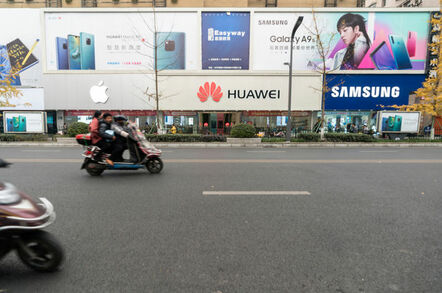 A billboard next to a Huawei retail store in downtown Chengdu, Sichuan province, China. Image by B Zhou/Shutterstock

Huawei founder Ren Zhengfei does not give interviews, so the two-hour audience the firm granted to US media on Monday was a landmark - and perhaps a recognition of the crisis enveloping the company. Huawei faces a rising tide of headlines about its trustworthiness as a corporate supplier.

The session gave a fascinating insight into the founder’s early years, the company’s ownership and management structure - and of course, how he will respond to state-fuelled concerns about Huawei’s security.

It would appear no questions or topics were off-limits to “Mr Ren”, with plenty mentioning espionage, and even whether the criticism of Huawei is politically motivated.

Zhengfei described Huawei as a “sesame seed” in a great power conflict. Huawei is “not that important”, he told the media.

In response to being shut out of markets, the founder said Huawei would take the hit, something it could handle because it was a private concern. Ren alluded to the benefits of being a private business several times.

“Capital tends to be greedy. Whenever there is an immediate interest, capital tends to take it away, and that would certainly compromise the long-term pursuit of ideals. We are a private company, so we are able to remain committed to our long-term ideals,” he explained at one point. At another, he proclaimed himself pleased that “we aren't overly concerned about beautiful numbers, or a nice-looking balance sheet. If we are not allowed to sell our products in certain markets, we would rather scale down a bit. As long as we can feed our employees, I believe there will always be a future for Huawei.”

He also talked up the smartphone firm's heavy investment in R&D.

“Public companies, however, are unlikely to do this [invest $15-20bn a year], because they focus on making their balance sheets look good. What matters more to Huawei is the future industry structure. Our decision-making system is different from public companies. It is very simple, and we are working hard to make the information society a reality.”

Ren said he had urged Chinese people not to retaliate when the US boycotted Chinese products.

So who owns Huawei?

Ren said his father had been imprisoned in a barn for being a “capitalist roader” - the capitalist road being a phrase coined by Chairman Mao in 1949 for someone sympathetic to business. Later, Mao’s great rival (later jailed in the Cultural Revolution), Deng Xiaoping was the most prominent “roader”.

“My little invention was exaggerated into something really big and it was promoted in various media outlets, including newspapers, magazines, movies, etc. And because of such massive publicity, luckily I was chosen to be a member of the National Science Conference.”

The Party affiliation was required because it was mandatory “even to become the head of a cooking team in the military”.

One interviewer did note that China’s state-owned favourite ZTE has been singled out with official sanctions - something Ren said he believes will not happen to Huawei. And its commercial relationship with operators is strong.

Ren went into considerable detail on ownership and management structures.

The company opted for an employee share structure simply because he was relatively skint when it started, he explained.

“At the time when I wanted to found Huawei, I did not have enough money. When I got demobilized from the military, my wife and I received a total of CNY3,000 (£344) as compensation from the military. At the time, a minimum of CNY20,000 (£2,298) was required as registered capital to start a company in Shenzhen. By pooling funds from different people, I managed to get CNY21,000 to register Huawei.”

Over 96,000 employees past and present have just voted for the first Representative Commission, from various levels in the company, he told interviewers.

We don’t really find out what this does, only that “The Chairman of the Board chairs the Representatives' Commission to ensure rules set out in the Articles of Governance are followed by the Executive Committee and the whole Board of Directors”.

On 5G, the CEO had a gentle nudge for the US. Rural coverage will need the best technology out there, he suggested.

“There are only several companies in the world working on 5G infrastructure equipment, and not many companies are engaged in microwave technology,” was the boast.

“With that capability, our 5G base stations don't even need fiber connections. Instead, they can use superfast microwave to support ultra-wide bandwidth backhauls. This is a compelling solution that makes a lot of economic sense. It works best for sparsely populated rural areas.”

“Without fiber, how can they enjoy an 8K resolution TV experience in the future? If Huawei is not involved in this, these districts may have to pay very high prices in order to enjoy that level of experience. By then, things might become very different. Those countries may voluntarily approach Huawei and ask Huawei to sell them 5G products rather than banning Huawei from selling 5G systems. We are a company that is customer-centric; therefore I think it is possible that we will sell our equipment to them”

Ren was invited to speculate that the opposition to Huawei in some markets was political: chief rivals Nokia and Ericsson are struggling to keep pace.

“We will not take advantage of the difficulties that our peers like Nokia and Ericsson are facing, in order to seize their market shares. I also think that the macro environment is in their favor, because there are restrictions on Huawei in some countries, but there are no restrictions on those companies. Therefore, I believe they may have more opportunities than Huawei.”

He said Huawei does not have communication channels open with the US authorities - but spared a word of praise for US President Donald Trump.

“For President Trump as a person, I still believe he's a great president, in the sense that he was bold to slash taxes. I think that's conducive to the development of industries in the US,” he said. And that was all he had to say about the learned POTUS. ®