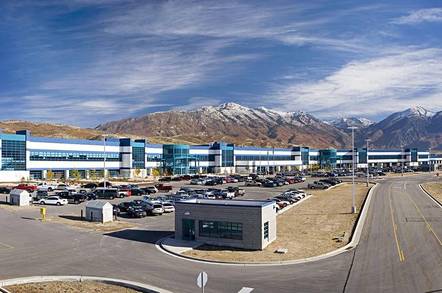 Micron has confirmed it will indeed buy Chipzilla’s interest in their IMFT flash foundry joint-venture based in Lehi, Utah.

The intent to do this was first announced by Micron in October last year at an estimated cost of $1.5bn. It means that from the closing date of the transaction Intel will need to have its Optane 3D XPoint and 3D NAND made elsewhere.

Micron’s option to buy out Intel’s IMTF interest contractually started from January 1. Intel is to decide when the buyout actually closes and there is a six- to 12-month window in which that has to happen. That deadline put the dates between July 14 2019 and January 14, 2020.

Micron said it was taking this step to “accelerate our R&D and optimise our manufacturing plan for 3D XPoint”.

“The [IMTF] Utah-based facility provides us with the manufacturing flexibility and highly skilled talent to drive 3D XPoint development and innovation, and to deliver on our emerging technology roadmap.”

“There is no change to our plans in the coming quarters. … This was expected and has been part of our planning for some time now. We have a number of manufacturing options available to us and have been shipping a broad portfolio of Intel Optane technology products for more than a year.”

That portfolio includes the recently announced Optane DIMMs, with Supermicro putting an early release programme in place to ship servers using these DIMMs.

Micron expects to announce, if not ship, its first 3D XPoint products by the end of the year. El Reg has noted that the IMTF foundry is already producing XPoint chips, so by implication Micron could package them in its own branded drives right now, unless there are contractual funnies between Intel and Micron preventing this. ®