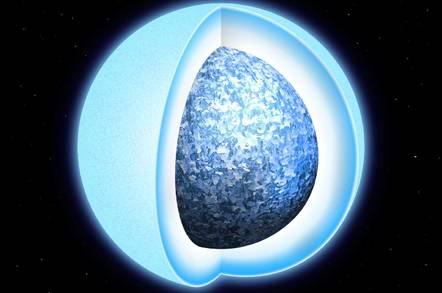 A crystallized core of a white dwarf ... Illustration by ESA

A scan of the heavens has shown space is littered with the crystallized remains of stars, and our own sun is expected to go the same way, too. Yes, turning into a crystal ball.

Smaller stars that don’t get to end their lives and go out with a supernova bang eventually peter out to become white dwarfs. These burnt-out stars are reduced to dwindling orbs of gas made up of electrons and carbon and oxygen ions. As they shrink, the ions are squeezed closer together until they eventually freeze in place to form ordered crystal lattice structures. Our sun is also expected to end its life in the same manner, crystallizing like a jewel in about 10 billion years.

This crystallization process was first predicted by Hugh Van Horn, a theoretical astrophysics professor at the University of Rochester in America some fifty years ago. Now, a team of researchers has finally observed these stellar remnants by digging into data collected by the European Space Agency’s Gaia spacecraft. The results were published this week in Nature.

Gaia has been helping scientists build a 3D map of our galaxy. It pinpoints the position of local stars and studies their properties to great detail.

“Previously, we had distances for only a few hundreds of white dwarfs and many of them were in clusters, where they all have the same age," said Pier-Emmanuel Tremblay, lead author of the study and an assistant professor at the University of Warwick.

"With Gaia we now have the distance, brightness and colour of hundreds of thousands of white dwarfs for a sizeable sample in the outer disc of the Milky Way, spanning a range of initial masses and all kinds of ages."

The researchers analyzed a whopping 15,109 white dwarfs and mapped their luminosities and colors and saw a strange group of data points sticking out.

“We saw a pile-up of white dwarfs of certain colors and luminosities that were otherwise not linked together in terms of their evolution,” said Tremblay. “We realized that this was not a distinct population of white dwarfs, but the effect of the cooling and crystallization predicted 50 years ago.”

Crystallization sets in when white dwarfs cool down to ten million degrees Celsius and bigger stars will crystallize faster than smaller ones. During the process energy is released, Tremblay explained.

“We believe this is due to the oxygen crystallizing first and then sinking to the core, a process similar to sedimentation on a river bed on Earth. This will push the carbon upwards, and that separation will release gravitational energy.” ®