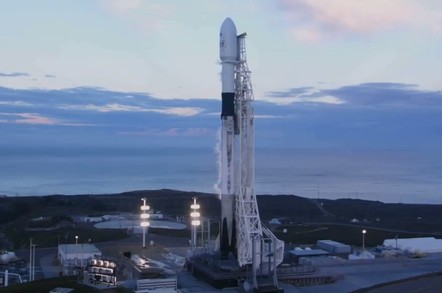 SpaceX launched its first mission of 2019, fulfilling its Iridium contract, while the Falcon 9 due to loft the company's Crew Dragon demo mission remained resolutely attached to Florida.

The first stage of the launcher had previously seen action in September 2018, lofting the Telstar 18 VANTAGE satellite.

At two minutes 27 seconds after lift-off the first stage was shut down, and the second stage fired up, sending Iridium's birds to space during a 15-minute deployment almost an hour later.

SpaceX landed the booster on its droneship "Just Read The Instructions", stationed safely out in the Pacific.

The company still refers to the landings as "attempts" although its business plan does depend on the recovery of those boosters being a sure thing. In a call with reporters in 2018 (PDF), Musk reckoned the current generation of Falcon 9 boosters should be able to manage 10 flights without needing an overhaul, and go for at least 100 flights before retirement.

In a surprise to absolutely nobody, SpaceX's first actual launch of the Crew Dragon for the Demo-1 commercial crew mission has been delayed. Yesterday, NASA announced that the launch date, originally been penciled in for 17 January, had slipped to "no earlier than February" due to what the agency described as "hardware testing and joint reviews".

Certainly, anything that requires much in the way of assistance from the space agency is going get more difficult to accomplish as the current US government shutdown continues to keep federal employees and contractors away from their desks.

But don’t worry! Starship will save us all

Of course, Falcon 9 is but a mere stepping stone to Elon's mighty Starship, and His Muskiness unveiled a finished version of the test flight rocket at SpaceX's Texas facility this morning.

Starship test flight rocket just finished assembly at the @SpaceX Texas launch site. This is an actual picture, not a rendering. pic.twitter.com/k1HkueoXaz

Musk insisted in a later tweet that the final version would lack the, er, ribbed appearance of the VTOL test version, which puts us in mind of something that Buster Crabbe might have flown in black-and-white battles with Charles Middleton.

The SpaceX supremo went on to promise a June time frame for the first orbital prototype. Cunningly, and doubtless aware of the Musk Time Dilation Factor, he did not specify a year. ®

Should be done with first orbital prototype around June