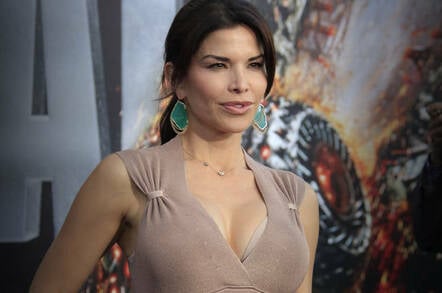 Within hours of announcing that he and his wife are divorcing, what's alleged to be Amazon tycoon Jeff Bezos' steamy texts to his new girlfriend were leaked online.

Seeing as the billionaire tech CEO and his cloud giant, AWS, are mad keen on developing and deploying watchdog-worrying invasive artificial intelligence, we thought we'd train a neural network on his purported secret love notes to predict what his new squeeze, ex-telly-anchor-turned-helicopter-pilot Lauren Sanchez, 49, can look forward to as pillow talk in future.

On Wednesday this week, Bezos, 54, told the world he and his novelist wife MacKenzie, 48, were splitting after 25 years of marriage. Months beforehand, Bezos was jetting off around the planet with his new girlfriend Sanchez, sending her raunchy texts and selfies, and living it up in palatial and exotic getaways, according to the National Enquirer. The kinda stuff you expect from Earth's richest man: swish limos, a swanky $65m private plane, hidden luxurious love nests. Probably best not thinking about it too much.

Jeff and MacKenzie are understood to have separated some time ago, although were apparently seen in September celebrating their silver anniversary together. And while Sanchez is married to Hollywood mogul Patrick Whitesell, the couple are also estranged. Bezos and Sanchez deny cheating on their partners, as some journalists have alleged, and were first seen in public together in October.

The Amazon supremo is said to have met his now-lover through Whitesell, and grown close to her after she took aerial shots of his Blue Origin space rockets on a work assignment for him.

Then on Thursday, the texts came out, and... they are hard reading. But what do you expect from someone famous for being so busy and uptight, he sends just single-character question-mark emails to his terrified staff?

Ah yes. Tech angle. We were recommended the open-source textgenrnn project to build our BezosBonkBot neural network. It's a fine collection of Tensorflow-based machine-learning software that doesn't deserve this shabby treatment.

So let's start with creating a plain text file, each line a sentence from the suggested silky smooth sexts, to train this simple AI.

No, we haven't mixed up the neural network output with the training input. That car crash is coming later. Those lines allegedly are Jeff's cyber-sweet-nothings.

Let's spice this up with inspirational and empowering quotes from the biz baron himself over the years, the kind of platitudes that startup founders tattoo on their children's eyelids. "Kindness is a choice." "If you never want to be criticized, for goodness sake don't do anything new." That kind of thing. Let's add his gentle market-crushing wisdom to the training dataset...

OK, time to take this out for a spin. We'll save the combined training data in training.txt, and fire it up:

Sorry, I must have missed the part where I enabled "seventh-pint chat-up-line slurring." No, it's because the epoch setting is too low. Let's whack that up to two, and see what robo-romance we get out of it:

OK, this is embarrassing. What we need is some more training data. Let's pour in some genuine love notes, things normal people say to each other. "You should tell me what I did to deserve you, so I can keep doing it." That sort of thing. "Whenever I think of you, I just can't help but smile. Falling in love with you is the greatest thing that has ever happened to me, and I've never been happier in my life. I know this feeling will last forever."

We'll even throw in Bezos' favorite quote, by Ralph Waldo Emerson; the one he literally pins to his fridge to remind him on a daily basis of his unimaginable success and fortune, y'know just in case the gigantic sprawling properties, 12-digit wealth, and business empire somehow don't quite jog his memory that morning:

To laugh often and much; to win the respect of intelligent people and the affection of children; to earn the appreciation of honest critics and endure the betrayal of false friends; to appreciate beauty; to find the best in others; to leave the world a bit better, whether by a healthy child, a garden patch, or a redeemed social condition; to know even one life has breathed easier because you have lived. This is to have succeeded.

The full training set is here, if you want to torture yourself. OK, let's take the epoch setting up to 20, and try again:

All right, this experiment is fucking garbage. This is more like "A Man From Mars" (an institution on The Reg's comments forums) than Cyborg John Keats. You're fired, BezosBonkBot.

So, what have we learned today? That neural network algorithms, hardware acceleration, and programming are perhaps not even half the battle when producing an AI system. Plentiful buckets of high-quality training data are needed to get anything useful out of your code. And tweaking. Lots of tweaking.

More importantly, questions are now being asked about the future of the tech overlord and Washington Post owner's fortune and biz kingdom. MacKenzie and Jeff wed just before he started Amazon, she has backed, supported, and adored him ever since through the good and the bad. Under Washington state law, she theoretically gets 50 per cent of his $140bn wealth. Investors were slightly jittery at the news, though analysts reckon the ownership of Amazon will not be affected.

On Twitter, Bezos said he and MacKenzie – who have three biological sons, and a daughter adopted from China, aged 13 to 18 – will remain friends after their divorce:

In a statement through his lawyers, the Twitch.tv owner added he "supports journalistic efforts and does not intend to discourage reporting about him." We think this counts as reporting, right? ®