What Captain Cook can do next for Cupertino 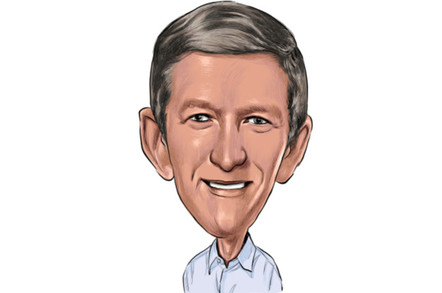 Comment Like a comedy sketch Lord Nelson, Apple CEO Tim Cook held the telescope to his eyepatch this week and told investors he couldn't see any enemy ships.

Everything's just fine, he told CNBC's Jim Cramer. "I think Apple is not well understood in some of Wall Street." Or perhaps it's very well understood. Here are a few things Cook might like to ponder.

The crisis that we in the media like to call "Peak Apple" has come and gone many times before – most recently in 2013/14. In response to flat sales, Apple abandoned its dogmatic design philosophy of making one tiny iPhone and bounded free. This change created a "supercycle" of upgrades. This time might be different, for a number of reasons. The supercycle has never returned.

Firstly, Apple is less diversified, and more heavily exposed to a market that some would argue is now "in recession".

(To his credit, this is something Cramer brought up.)

Do not adjust your set: Hats off to Apple, you struggle to shift iPhones 'cos you're oddly ethical

Secondly, and it's a pity the interviewer didn't follow up with this, the smartphone market is now mature, with on-device features and software comparable between $1,000 phones and $500 phones, and changing only a little year to year. That last part is crucial. If you're nonplussed about having to upgrade your trusty iPhone after two years, you may as well wait three. Another 12 months go past and it hasn't advanced much more... Why bother? Make that four.

As we argued recently, the "crisis" is self-inflicted – not only because Apple has pushed prices up, but partly because it has done the right thing and failed to honour the cynical tradition of built-in obsolescence. Its products are more durable and better supported than rival tat. So that four-year-old iPhone now runs pretty well again with iOS 12. Something shinier that isn't an iPhone demands your money.

What Apple's rebound from its 2013 Peak Apple crisis proved was that it's in an upgrade market. It doesn't attract so many new customers in mature markets. This means sales in emerging markets like India and China are far more important to Apple's future – and it's gradually making its flagship product less and less attractive to this new emerging middle class.

Cook pointed to 1.3 billion active users of Apple services (and $41bn annual revenue from those services). But this is what high iPhone prices imperil. Not so much here, but certainly in rapidly developing markets where it wants to keep customers for the long term.

Complacency also played a part. The iPhone XS and Max upgrades were lazy, offering only marginal improvements. Cook consistently points to the "bionic chip", something that emphasises how marginal its work is (Portrait mode and Animoji). The iPhone XR, meanwhile, is a genuine, head-scratching "what were they thinking?" product. It's clunky and very heavy (over 70g heavier than an iPhone 7) for a market used to slim, pocketable designs. This is something we – and almost nobody else – pointed out here in November, but it has since been expressed by people shunning the upgrade.

The short-term answer is to cut the price of the phones – which Apple has already started to do, tepidly, by stealth, via the rebate programme. I have my doubts that this will make much impact, at least in the UK where people know the value of their iPhones. You may as well stick yours on eBay. This initiative is a "rebate", yes, but a lousy "deal".

In the long term, Apple can do several things. It can price its products more shrewdly. We've often sung the praises here of the iPhone SE, the sub-£400 iPhone that offered modern components in a great package. But Apple axed the SE last September. Perhaps it needs to "do an SE" with more of its range – keeping the case and design but upgrading the components. And more obviously, it can price a strong product more sensibly: closer to £500 than the £749 where the XR starts today (and that confusing, un-Apple-like X-naming can also go).

Cook may be right that the market is too "emotional in the short term". But the market also attempts to price in long-term risks, and the biggest of those right now is that Apple becomes an irrelevance in emerging markets.

Cook offered Cramer a hint that peripherals and services around health might play a part: "I do think, looking back, in the future, you will answer that question, Apple's most important contribution to mankind has been in health."