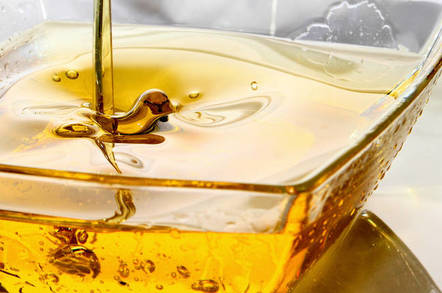 As if Brexit chaos wasn't enough to bring us down after the festive season's indulgence, South West Water has brought word of a new fatberg in town.

The latest mass of hardened fat, oil, wet-wipes, condoms and other filth congealing under our fair isle was discovered lurking below the streets of Sidmouth, a charming tourist town in Devon.

Thundering in at 64 metres (210ft) long, the mass of holiday-makers' oily leftovers has earned Sidmouth the somewhat dubious honour of being home to the county's largest fatberg.

According to South West Water, it's also thought to be one of the largest found so close to sea – just imagine that floating past while you're on your lilo this summer*.

In covering the discovery of the greasy sewer-dweller, various newspapers used the tired standard measurement of double-decker buses – about six, by the way – but a couple did try to spice things up.

But of course here at Vulture Central, we have our own Reg Standards Bureau full of much more relevant things to convert length into.

This means the Devon fatberg is more accurately described as being the length of 457.14 linguine (unboiled at sea level), or 2.91 Brontosauruses.

There is no official word on how heavy the coastal beast is, but London's monster fatberg, which was a whopping 250m (or 3.9 Devon fatbergs), weighed in at 130 tonnes.

Assuming all fatbergs have the same length to weight ratio – which does seems unlikely, but, well, we're committed to this now – the Devon specimen would weigh about 34 tonnes, or 14,943 adult badgers or 86.7 skateboarding rhinos.

Urging people to stop pouring oil down their kitchen sinks or flushing all-and-sundry down the toilet, South West Water pointed out that tackling one new sewer blockages every hour added £4.5m to people's bills each year. Which sounds pretty bad, until you realise that's just 0.05 Pogbas (Pg) or 0.0045 DUPs.

The Devon fatberg will be duly inducted into the Reg Standards Bureau, and available in our convertor, here, for you to use for your future length-measurement needs. ®

* Luckily, South West Water said the blob "has been identified in good time with no risk to bathing waters".