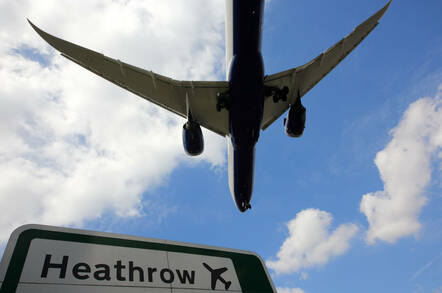 London Heathrow Airport temporarily halted departing flights this evening after a drone was apparently spotted hovering in the area.

Staff hit up the capital's Met Police to help probe the alleged sighting, according to a short statement issued on Twitter at 0947 PST (1747 UTC)...

We are responding to a drone sighting at Heathrow and are working closely with the Met Police to prevent any threat to operational safety. As a precautionary measure, we have stopped departures while we investigate. We apologise to passengers for any inconvenience this may cause.

As the UK and Europe's busiest airport, and the planet's second busiest, any disruptions to flights will have noticeable knock-on effects for the rest of the world's air travel. We've yet to clock any pictures or footage of the Heathrow techno-pest.

#Breaking Police officers were among witnesses who saw a drone at Heathrow Airport and the military has been brought in to provide assistance, Metropolitan Police Commander Stuart Cundy said

It’s not the first time claims of flying gizmos have disrupted operations at a major Brit airport. Random alleged sightings of drones plagued London Gatwick in December. The cops claimed dozens of "credible" witnesses reported seeing one or two quadcopter-like things over the runways, though no actual device was ever found. Two people were arrested but released without charge or suspicion. Departure flights were temporarily halted, and some arrival flights were diverted to other airports, including London Luton Airport, London Stansted Airport, and Manchester Airport.

Police have yet to find the culprits behind the Gatwick drone, if it ever existed: at one point, a senior officer suggested there may never have been a drone at all, though that was later said to be a "miscommunication," and the plod were really truly treating the sightings seriously. You wouldn't want to close a major airport over nothing, right? Right, guys?

Why anyone is bothering to block flights with flying gizmos, beyond mindless mischief, is a mystery. One theory put forward was that it could have been a protest staged by environmental terrorists, or perhaps it was simply a case of mistaken reports.

Heathrow has had such problems in the past. In 2016 there was panic when there were reports that a drone had struck an Airbus A320 coming into land at the airport. It was later determined to be a plastic bag.

Drones are pesky devices to deal with. You can't easily shoot them down as we explained here.

Today's drone alert is now over, though, according to Heathrow, and normal operations have resumed, presumably because the machine, if it existed, has sodded off for the night... ®

We continue to work with the Met Police on reports of drones at Heathrow. We are working with Air Traffic Control and the Met Police, and have resumed departures out of Heathrow after a short suspension. We will continue to monitor this and apologise to anyone that was affected.

No flight delays at Bristol base, miraculously*