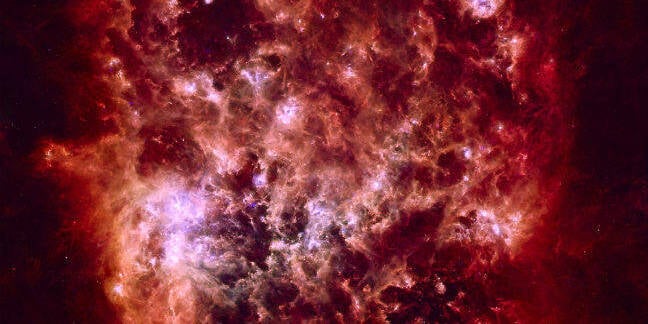 The Large Magellanic Cloud is coming for you...

It has long been known that our Milky Way is on a collision course with the Andromeda galaxy, with the epic prang to take place in four to eight billion years' time. New data suggests we'll hit another galaxy well before that, though, and the super-smash could send our Solar System headfirst on a path out of the Milky Way.

Our home galaxy is a strange neighborhood of the universe: the supermassive black hole at the center of the formation is unusually small and quiet. The Milky Way is also orbited by a satellite galaxy known as the Large Magellanic Cloud (LMC), which is itself consuming a smaller galaxy. The LMC was thought to be fairly harmless, and circle us for a long while. New figures out today by astroboffins, though, predict that the LMC will slam into the Milky Way a lot sooner – in about two billion years – with dramatic effect.

“The destruction of the Large Magellanic Cloud, as it is devoured by the Milky Way, will wreak havoc with our galaxy, waking up the black hole that lives at its centre and turning our galaxy into an ‘active galactic nucleus’ or quasar," said Dr Marius Cautun, a postdoctoral fellow in Durham University’s Institute for Computational Cosmology and lead author of the study [PDF] in the journal Monthly Notices of the Royal Astronomical Society.

“This phenomenon will generate powerful jets of high energy radiation emanating from just outside the black hole. While this will not affect our solar system, there is a small chance that we might not escape unscathed from the collision between the two galaxies which could knock us out of the Milky Way and into interstellar space.”

The LMC is about 163,000 light-years away, and it had been assumed it would either continue orbiting the Milky Way for billions of years, or head away from our galaxy. Researchers in Durham, England, and Helsinki, Finland, used the Evolution and Assembly of GaLaxies and their Environments (EAGLE) simulator, which can recreate the movements of 10,000 galaxies at a time, to show a cosmic crash with the LMC is coming much sooner than expected.

You live in the right galaxy: Milky Way to eat Small Magellanic Cloud even sooner

If the mega-merger happens, it is expected to have a drastic effect on the black hole at the center of our galaxy. The incoming extra mass from the LMC will swell our black hole by a factor of eight and the stellar halo, the cloud of stars and bodies that surround the main galaxy, will increase fivefold.

With any galactic collision, there is a chance that solar systems like ours could be severely perturbed and may be hurled out of the galaxy. But the chances are slim, thank goodness.

"Beautiful as it is, our universe is constantly evolving, often through violent events like the forthcoming collision with the Large Magellanic Cloud," said paper coauthor Professor Carlos Frenk, director of the Institute for Computational Cosmology at Durham University.

"Barring any disasters, like a major disturbance to the solar system, our descendants, if any, are in for a treat: a spectacular display of cosmic fireworks as the newly awakened supermassive black hole at the centre of our galaxy reacts by emitting jets of extremely bright energetic radiation.” ®