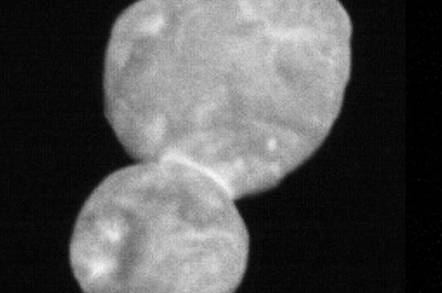 More detailed images have emerged showing 2014 MU69 (aka Ultima Thule) is actually two distinct bodies, held together by the processes that form planets.

The latest images transmitted by the New Horizons probe, as it continues the 20-month process of sending Earthwards all that lovely science data collected during its flyby, show Ultima Thule is actually a "contact binary" consisting of two connected spheres.

Demonstrating a disappointing lack of imagination, scientists have dubbed the larger sphere (12 miles across) "Ultima" and the smaller (nine miles across) "Thule". We'll forgive them for not coming up with anything more creative since their minds are likely blown by the sight of planetary formation caught in the act, so to speak.

Boffins reckon that the spheres joined in the very early days of the formation of the solar system and now give an unprecedented insight into how planets are built.

Jeff Moore, New Horizons Geology and Geophysics team lead, squeaked excitedly: "New Horizons is like a time machine, taking us back to the birth of the solar system. We are seeing a physical representation of the beginning of planetary formation, frozen in time.

"Studying Ultima Thule is helping us understand how planets form — both those in our own solar system and those orbiting other stars in our galaxy."

The latest images, from the probe's LORRI telescope, were taken on approach to 2014 MU69, 18,000 miles away, 30 minutes before the spacecraft flew by less than 2,200 miles from the object. An earlier colour image, taken by the Multispectral Visible Imaging Camera (MVC), shows a reddish surface, that, rather than NASA's snowman assertion, put us in mind of South Park's Mr Hankey.

What has got scientists all a-quiver is that the appearance of Ultima Thule seems to confirm theories of planetary accretion, which has specks of dust colliding to form objects with sufficient gravity to attract each other.

The mutual gravity of Ultima Thule's lobes appears to be holding the pair together, and scientists theorise that smaller objects have settled in the valley, or "neck", where the lobes meet, giving a brighter appearance.

Also of interest is the apparent lack of craters, hinting at a surface built through accretion rather than the violent impacts seen in the inner solar system. The coming days and months will bring higher resolution imagery as the probe continues to squirt its data back to Earth. ®

NASA says New Horizons' next stop might have a moon

Remember that 747 with an open door and a telescope? It spotted a moon-esque blip

Kuiper-belt-bound craft needs a few weeks of tweaks to prepare for Space Duck 2.0

Close Encounters of the Kuiper Belt kind: New Horizons to come within just 3,500km of MU69

Probe skipped past Pluto by 12,500km, so this rock needs to prepare for its close-up

Roundup Also: Is that an aerospike in your pocket or are bells more your thing?

How's that for a remote login? NASA puts New Horizons probe to sleep 3.5 billion miles away