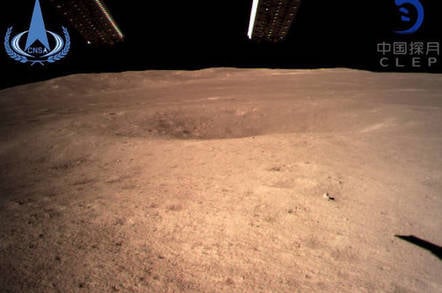 China National Space Administration photo from Chang'e 4 on the far side of the Moon showing, er, the Moon

China's Chang'e 4 spacecraft has touched down on the Moon, state media reports, making it the first-ever probe to set down on the far side of Earth's natural satellite.

The spacecraft, which blasted off into the heavens on December 7, was in an elliptical orbit around the Moon, swinging within 15 kilometres (nine miles) of the lunar regolith. The lander has now descended into the 13 kilometre (8.1 mile)-deep South Pole-Aitken Basin in what was described as a soft landing, and will release a 140kg rover to investigate the surface when ready.

The landing is the culmination of months and months of engineering work. In May, China sent a communications satellite to the far side of the Moon to handle communications with the Chang'e 4 lander and rover, because their location otherwise prevents any direct link-up with Earth-based controllers.

While the far side of the Moon has been photographed since the 1950s, humankind had yet to successfully land there until now. The US tried in 1962 with the Ranger 4 probe, though boffins lost control of the spacecraft and it slammed into the surface.

The Chinese authorities are hoping for a more useful visit to our natural satellite, using the experience gained from the 2014 Chang'e 3 lander and its Jade Rabbit rover. That mission was only a partial success, since the rover suffered serious problems and died less than two months on the Moon, although the lander is still operational.

The landing for the new rover could have been tricky, since it is descending into one of the largest craters on the Moon and the uneven terrain could cause issues. The Aitken Basin – some 2,500km (1,600 miles) in diameter – is thought to have been formed by a massive impact and the resultant hole exposes the subsurface layers of the Moon.

Assuming all is well the lander and rover will examine the walls and floor of the crater, using twin cameras, a spectrograph and ground-penetrating radar. With luck the Chinese will share their detailed views of the Moon's backside, and we can all learn more about our satellite. ®