Oz cops investigating screams of 'why don't you die?' find bloke in battle with spider

Sprinkle some 'crying toddler' in there for maximum horror 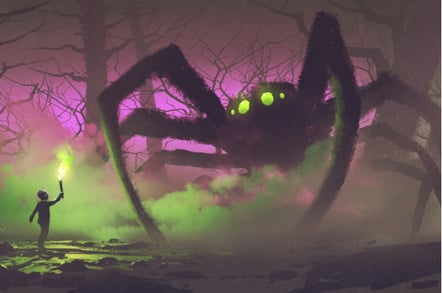 You have to hand it to the passerby who called the cops after hearing a chap yelling "why don't you die?" along with the cries of a toddler.

On its own that's rather concerning, but less surprising when you learn this happened in Australia, where the majority of fauna seem set on cleansing humans from the continent.

Police sent to investigate the Perth suburb were faced not with a gruesome murder scene, but a sheepish arachnophobe desperately trying to dispatch a spider.

"It's just one of those jobs where you go expecting to see one thing and see another," a police spokesman told the BBC.

"It's great that it's only an incident involving a spider."

A log of the incident, initially posted on Twitter but later deleted (something about exposing police systems), read: "Caller walked past the AA and heard a male screaming out 'Why don't you die' – repeatedly. The toddler inside was screaming... caller doesn't know them, but has seen them a few times when walking."

Officers on the scene followed up: "Police spoke with all parties who advised that husband had only been trying to kill a spider (has serious fear of spiders). Apologised for inconvenience to police.

"No injuries sighted (except to spider). No further police involvement required."

In boring, grey, temperate UK, the most dangerous creature you're likely to run into is a dairy cow or red deer – neither of which actively seek to do people harm – so such a response to a spider here would naturally be mocked.

But Australia is another story. Although it's not clear what species had invaded the spooked dad's home, you can take your pick from a long list of venomous and/or massive eight-legged freaks.

Cast your mind back to 2016, when an unfortunate Ozzie builder was bitten on the willy not once, but twice in the space of five months by a redback spider (popularly known as black widows) – and the homeowner's reaction begins to make sense.

I mean, just look at this joker:

Nor is this the most extreme case of man vs spider we've covered on The Reg. Last year a guy from California almost burned down his parents' home by using a blowtorch to clear the loft of redbacks.

So, whoever you are, Australia man, we feel you. ®