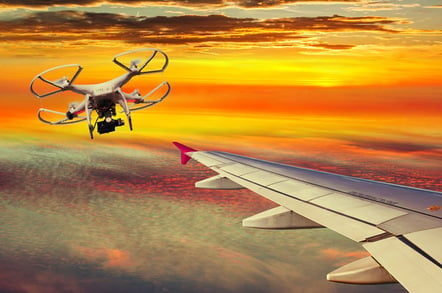 This is not the drone cops were looking for...

London Gatwick Airport has reopened after closing for more than a day due to a seemingly deliberate drone disruption ploy – but police still haven't caught the perpetrators.

The errant drones, which are of an unknown make and model according to Sussex Police, were being flown near enough to Gatwick's runway to trigger a full shutdown of the airport.

While police eventually did not rule out shooting down the drones, El Reg has a handy guide here to all the immediate answers bubbling up in people's heads about how to stop the devices. It appears more than one craft was being flown at intervals from different locations, just often enough to keep the airport closed down.

Police reported that they had had 50 sightings of the drones in the last day alone.

Although the airport has been reopened, "mitigations" are now said to be in place in case the errant craft show up again. 120,000 people have had their flights cancelled and the government has reportedly relaxed night-time flight restrictions in other airports, including London Heathrow – the country's largest – in order to get holidaymakers on their way.

Around 280 police were involved in the search for the culprits. Nobody knows quite why they haven't been caught yet, though one theory is that they may be environmental rights terrorists. Another possibility is that they could be one or more sacked airport workers with enough inside knowledge to get around planned anti-drone responses.

It is claimed... a £2.6m Israeli Drone Dome system, bought by the British to destroy ISIS drones in Syria, was used to bring down the Gatwick quadcopter. The cops had tried to use a DJI drone tracker, which pinpoints devices in the sky and works out where the operator is, but the Gatwick gizmo was likely non-DJI or otherwise modified to evade detection, so the off-the-shelf tech didn't work.

In the end, we're told, one of the Army's ground-based Drone Domes was brought in, found the drone using a laser, and then jammed its control signals, forcing it to land. The equipment, built by Rafael, can work out how strong the jamming needs to be to overwhelm the quadcopter.

With new drone laws dragging their way through Parliament for most of this year, we can expect the Drones Bill, and its new restrictions on registration and licensing, to be fast-tracked in January. ®

Christmas has been and gone, and Brit cops still have no idea who operated the Gatwick drones, mulling at point that the quadcopters, er, may never have existed in the first place.