50 years ago: NASA blasts off the first humans to experience a lunar close encounter

The previous Saturn V didn't go so well, but you guys will be fine. Trust us 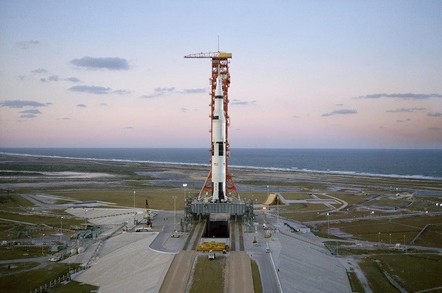 Fifty years ago today, the third Apollo crew were strapped into a capsule perched atop the third Saturn V to undertake a journey to the Moon.

It was in many ways more audacious than the eventual lunar landing itself.

The Saturn V the crew was to ride had a difficult birth. NASA had only managed to launch two by the time the Apollo 8 crew were sent off, and the last attempt had nearly ended in failure.

The first test flight, designated Apollo 4, was launched from Cape Canaveral's Pad 39A just over a year previously, on 9 November 1967. It was the first Apollo launch following the death of the Apollo 1 crew earlier that year and was an "all-up" test of the Saturn V stack. Everything on the rocket was fully functional, allowing NASA to drop the usual conservative testing steps preferred by its rocket boffins at the cost of potentially throwing away an entire Saturn V if one of the stages failed.

The goal was the send the thing into Earth orbit, with ballast to simulate the lunar module, which was woefully behind schedule. The all-important S-IVB third stage would be placed into orbit, but rather than sending the Apollo spacecraft toward the Moon would instead fire the remaining components back towards the Earth, simulating the velocity at which Apollo would return.

NASA reckoned the mission would kill not two birds, but validate a whole flock. On the other hand, failure would likely put the agency irretrievably behind the Soviet Union in the race to the Moon. Of course, NASA could not know then that by the time the earlier Gemini programme had achieved the first rendezvous in orbit, the USA had surpassed its Soviet rival.

Apollo 4 was a success from NASA's perspective, paving the way for a second test five months later in the form of Apollo 6.

Apollo 6 did not go quite so well.

The purpose of the mission, launched on 4 April 1968 from Pad 39A, was to simulate a lunar trajectory, although the Moon would not be aligned to allow the spacecraft to attempt a lunar flight. NASA, however, was more interested in testing the direct-return abort concept.

The Saturn V would be launched on a lunar trajectory, with the S-IVB sending the Apollo command and service modules and an almost-a-lunar-module test article on a trans-lunar profile. The spacecraft would be turned around, and Apollo 6 sent back toward to the Earth, handily testing the heat shield of the command module once more.

But severe oscillations (also known as "pogo") developed during launch. Fuel lines were ruptured and engines in the second and third stage were damaged. The spacecraft limped into orbit, but attempts to simulate the trans-lunar-injection manoeuvre were abandoned after the S-IVB failed to restart.

Ground controllers hurriedly improvised and opted to detach from the broken booster and use the engine of the service module to raise the orbit of the Apollo spacecraft to get closer to some of the mission objectives.

While the workout of the service module was useful (it burned for far longer than it would have been needed to on a normal lunar mission) the eventual re-entry velocity of the Apollo capsule was some way short of what was needed.

NASA put a brave face on things. While the problems could have killed a crew, the agency reckoned that the Apollo mechanisms would have whisked the 'nauts to safety. And the other issues could be fixed.

All change, please. All change

The Soviet Union's uncrewed Zond 4 had performed a lunar flyby in March 1968, increasing pressure on the USA in the race to the Moon. NASA's original plan had been for Apollo 8 to test the lunar module in low Earth orbit, but as the unwieldy lander fell further and further behind schedule, NASA found itself with a Moon rocket and an increasingly urgent need to go to the Moon.

In August 1968, it was decided that Apollo 8 would enter lunar orbit and return to Earth without a lunar module. This would have the additional benefit of saving some steps in the Apollo test programme and protect the opportunity for a landing in 1969.

As NASA worked through its plans, the Soviet Union launched the uncrewed Zond 5, which carried a cargo of animals around the Moon to a successful splashdown in the Indian ocean on 21 September 1968. Not knowing that problems with the Soviet re-entry would likely have killed a crew, NASA pressed ahead, fearing that it was about to be once again trumped by its rivals.

The original Apollo 8 crew, commanded by Jim McDivitt and trained to fly the first lunar module, was swapped with Frank Borman's crew. The new guys found themselves with around three months to retrain for the mission, with a focus on navigating to the Moon rather than testing out a lunar module.

In the meantime, teams from the Marshall Space Fight Center worked to reassure nervous NASA managers that a further uncrewed flight of the Saturn V was not required, demonstrating on Saturn test articles that their solutions to the Apollo 6 vibration issues would work.

NASA signed off the mission and, at 12:51 UTC on 21 December 1968, the Apollo 8 crew was launched on a trajectory governed by political needs as much as scientific exploration. ®