Risk of causing even more embuggerance is high, we repeat: high 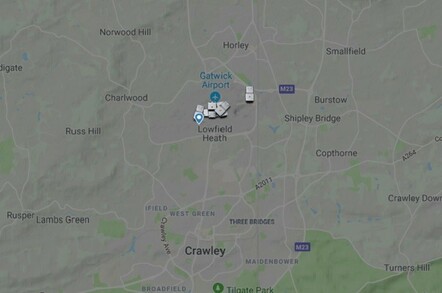 Gatwick Airport, as pictured on planetracker site Flight Radar 24. Note the lack of aeroplane graphics. The grey graphics are airport vehicles with transponders

Comment As the Gatwick drones chaos rolls on, with the airport now set to reopen at 8pm UK time at the earliest*, many people have been asking a simple question: why the hell can't the authorities just shoot down the offending drones?

Like all simple questions, the answer is complex. Counter-drones tech is a new field and not quite as easy as you might imagine.

1. Shoot the bastard down!

The most obvious solution is to shoot down the drones using a rifle or a shotgun. Here the problem is simple: a rifle bullet fired upwards travels a very long way if it doesn't hit its target, or passes through it. If you're using a .308"/7.62mm rifle pointed upwards at 70 degrees, the dangerous zone in front of it where the bullet could land is up to 2.5 miles or four kilometres long.

Are the police going to evacuate a 2.5-mile strip of West Sussex so they can go all Dirty Harry on the drones? Of course not.

What about a shotgun? This is far more likely than using a rifle. The danger zone for a shotgun firing the usual shot pellets is about 390 ft, or 120 metres, long, according to Blighty's Ministry of Defence. Unfortunately, there's no guarantee that once shot, the drones will land on the spot. A partial hit could send the drones flying off to crash on someone's house (the town of Crawley is next to Gatwick), or leave bits of the drones lying around on the airfield – ready to be sucked into a jet engine. Far from ideal.

It also depends where the drones are flying. If it is not flying directly over the airfield, you would need the landowner's permission to start shooting at it – as well as the permission of every other landowner that both the bullet/shotgun pellets might pass over on their way to the drone, and for good measure the permission of whoever might be the lucky recipient of the spent bullets or shot as they fall to earth. A faff, but not impossible.

Judging by police reports that the drones are "of an industrial specification", it could be that we're dealing with something like a DJI Matrice or an Aeryon Skyranger – larger than your average kid's toy (or a DJI Phantom, for that matter). Shotgun pellets lose energy rapidly: if the drones is flying at a few hundred feet above the ground, it might be the case that it's outside effective shotgun range.

The next thing you could do is jam the command signals controlling the drones. Is that doable?

No, really. Assuming the local police even have access to spectrum analysis equipment that allows them to find what frequency is being used to control the drone, they need legal permission to start broadcasting jamming signals.

That said, maybe they do have spectrum analyser kit?

Either way, the permission the plod need to jam the drones is something they simply don't have right now, as far as we're aware. You need to have authority under the Wireless Telegraphy Act to start broadcasting any kind of signal – even one intended to bring down a fleet of naughty drones.

(Edit: Our attention has been drawn to S93 (1)(b) of the Police Act, which allows an authorising officer to green-light wireless interference if a serious crime is taking place. Whether or not flying drones over airports is a serious crime – think fraud, violence, or something that would put you away for three or more years – is perhaps a sticking point.)

But let's forget the law for a bit and think about it. Even if the drones were being flown live, as opposed to following programmed waypoints, simply jamming the control signals introduces a real problem: where will the drones go? What will it do?

Most modern drones have return-to-base functions that kick in if they lose their control signal. Some do not. And if one of these drones doesn't do that, there's no telling what it might do: it might carry on flying in a straight line until it crashes. Or it could veer off towards all those very expensive airliners parked at the gates. It might even drop out of the sky and onto someone's roof, or greenhouse, or head.

It's just too unpredictable. And as we said, they may be flying on autopilot anyway to avoid control-signal jamming.

Too expensive and complicated, according to the flying Dutchmen who actually tried this idea a couple of years ago.

4. Fly a helicopter next to it and shoot it down! Or throw a net at it!

Refer to the first point about shooting. Also, what if the drones’ operator feels like adding a helicopter kill to their list of "bad things I have achieved today"? All they'd have to do is fly it into the rotor blades – or into the glass canopy protecting the pilots. If the drones are quadcopters, they can manoeuvre in three dimensions, rather than having to fly in a straight line like a normal aeroplane.

Phil Tarry, director of Halo Drones, told El Reg: "Other technologies proposed include dropping nets on them. Nets might not be able to go high enough. First you've got to catch them but it seems they're having problems tracking them."

Tarry continued: "I did the training for a system that was to be used during the London Olympics. Everything using GPS within a large area stops. It swamps the receiver. Difficulty with that being, if it's not using GPS, then that won't have any effect. It'll cause significant disruption to GPS, though."

Do you want to be the one who signs off on the use of something that potentially screws over nearby GPS receivers in phones, tablets, and satnavs, and aboard dozens of airliners? No, thought not. Aeroplanes do not rely solely on GPS, and have other navigational systems, but do you want to take that chance given the paperwork involved and potential added travel chaos and looming compensation claims? Do you want to find out the hard way that some planes need GPS to initialise takeoff procedures? Again, thought not.

Tarry also speculated that the drones’ operator could in fact be a number of people, based on the drones (plural) appearing and disappearing at intervals during the day, in spite of 280 police on the ground searching for whoever caused this disaster.

"It surely can't be an off-the-shelf DJI system," he said. "Either they've hacked it or it's a kit-built drone."

DJI drones are supplied with geofencing tech baked into their firmware to keep them out of restricted airspace, though, as previously reported, the drones themselves are relatively easy to hack to remove the restrictions. And the drones could be setup to not rely on GPS, thus jamming that may be fruitless.

So there you have it. You can't shoot it down, you may not be able to jam the controls, and disabling GPS may be pointless or non-trivial. At the time of writing, Sussex Police had contacted the British Army for help downing the drones with unspecified "specialised military tech", so perhaps they might shoot them down after all. ®

* This is very likely going to be pushed back soon. Airfield Non-Available times have been repeatedly rolled back by air traffic control throughout the day.

Updated to add at midnight UTC

Gatwick airfield is still closed. "Passengers due to fly from Gatwick should check the status of their flight with their airline and not travel to the airport if their flight is not confirmed," the airport spokespeople said in a statement.

"We have called in additional staff right across the airport, many from Christmas leave, and are working tirelessly with police and security partners to halt this drone flying and thank passengers for their continued patience."

While this remains a police-led operation, the military are on hand for support, we're told. Firearms to take down the pesky quadcopters haven't been ruled out after other lines of attack have failed. It is believed the drone, or drones, have been modified to evade the authorities.

Detective Chief Superintendent Jason Tingley, of Sussex Police, said there have been more than 50 sightings of drones over the airport since 9pm last night, adding: "We have to work on the assumption that this is a professionally prepared drone with the intent of causing the disruption."

Updated to add on 21 December

Gatwick runway reopened just before 0700 on the morning of Friday 21 December. A limited number of flights had already landed and departed by midday. It is believed signal jamming was eventually deployed, using anti-drone equipment purchased by the British Army, to bring down the Gatwick quadcopter.