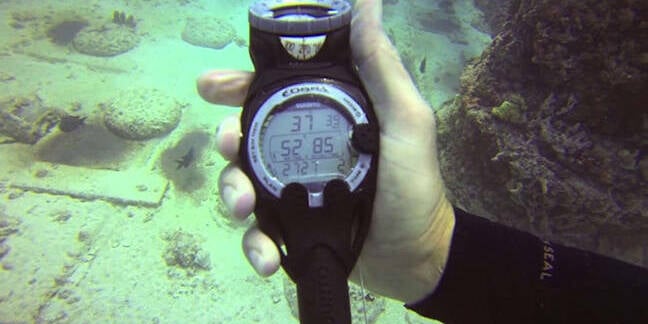 As anyone who has gone scuba diving will understand, it is critical that you know how deep you are, how long you have been diving, the air pressure in your tank, and how much air you have left.

Without this knowledge, divers risk ascending too quickly, and can get the bends: nitrogen absorbed in body tissue forms bubbles and can cause everything from headaches and joint pain to paralysis and, in extreme cases, death. As a result, all serious divers buy a diving computer. They cost several hundred dollars, are about the size of your palm, and provide constantly updated figures for critical diving measurements. They are a life-or-death piece of kit.

Which is why two divers, Ralph Huntzinger and Eric Bush, were less than excited when their diving computers, bought from scuba company Aqua Lung and manufactured by Finnish company Suunto, appeared to malfunction and allegedly started displaying the wrong depths, wrong air time left, and wrong air pressure.

They soon discovered that their problems were not a one-off, and other divers had complained about the same computers. It is even feared a diver died in 2010 due to a malfunctioning Cobra 2 Suunto computer: the brand new gizmo said the diver, Pamela Seigman, 55, had plenty of air left but her supply had in fact run out, it is claimed, and she drowned. She had been diving off the island of Lanai in Hawaii.

Speaking to other divers, Huntzinger and Bush discovered that the failure of Suunto's diving computers was relatively common and that its authorized repair shop and distributor in the United States, Aqua Lung, had a long log of such failures.

They decided to sue in California, claiming that both Aqua Lung and Suunto knew of serious defects in the computers but failed to issue any recalls and continued to sell the products. The lawsuit alleged that Aqua Lung knew from its own reports of permanent malfunctions in the equipment that it should have stopped selling and "repairing" the products; and that Suunto – which received the reports – should have stopped selling the gear when it was clear something was wrong.

Bitten by a Cobra

The lawsuit claimed Aqua Lung didn't actually repair the Suunto diving computers brought to its repair shops but simply replaced them – with the exact hardware and software that was already shown to be defective. It also claimed that the full range of Suunto computers – the Cobra, Vyper, Vytec, D-series, and others – are effectively the same, with the same hardware and software, and so all subject to the same problem.

Huntzinger, of San Diego, originally sued [PDF] Aqua Lung in 2015 but as the case progressed, the case was adjusted to bring in manufacturer Suunto. One of the law firms representing the plaintiffs was involved in a related wrongful death lawsuit concerning the computers.

Meanwhile, divers' suspicions were further raised when Aqua Lung ditched Suunto as a business partner shortly after the lawsuit was filed and purchased a company that offered similar products, Pelagic Pressure Systems. It subsequently emerged that Aqua Lung and Suunto had had lengthy and contentious discussions about the exact issue that the lawsuit was concerned about.

After three years of fighting, this month the lawsuit was officially settled [PDF], with the case closed during a final hearing on December 14. In short, Aqua Lung and Suunto agreed to test, repair, and replace defective computers – a settlement valued at $50m.

The divers' lawyer said the settlement achieved everything that they had set out to accomplish when they filed: anyone in the USA with a Suunto dive computer can file a claim and have their computer inspected for free by the companies. If any problems are found, they will be replaced or repaired for no cost. All replacements will also have an extended five-year warranty, three years longer that the normal warranty.

In addition, there is a $775,000 fund that will compensate divers who had defective computers that they threw away or replaced with a different brand. And any money left over after all these claims go through will be put toward training classes provided by Professional Association of Diving Instructors.

Suunto will also create a video to educate divers about how to identify sensor failure in their computers, and what to do if they discover a problem. And it will cover all the legal fees for the three-year case: just over $5m. Personal injuries or wrongful deaths are not covered by this settlement. ®