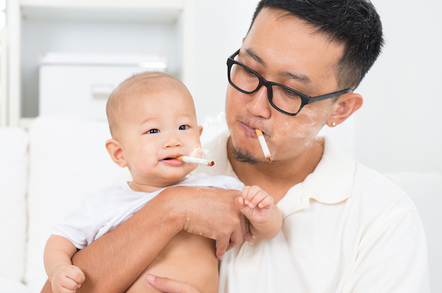 Relax, it's some neat Photoshop work – the baby is not actually smoking

In a clinical trial, smokers who agreed to join a cessation programme were divided into three groups. One received a high volume (five a day) of cognitive behavioural therapy-based personalised SMS messages, another a lower volume of the same messages (one to three a week), and the control group received none at all.

The groups blasted by texts reported more success at giving up than the control group.

The researchers call this method "Happy Quit". The conclusions have been published in PLOS Medicine under the title Effectiveness of a text-messaging-based smoking cessation intervention ("Happy Quit") for smoking cessation in China: A randomized controlled trial. The study was funded by the Chinese Medical Board.

The attraction of SMS bombardment to the Chinese authorities is that it's cheaper than pharmaceutical aids, such as nicotine patches or gum, or Varenicline, the synthetic compound used in Chantix and Champix, which effectively mimics nicotine to the brain's receptors, reducing withdrawal cravings.

Then again, successful quitters may become addicted to phones instead of nicotine – and we leave it to you, dear reader, to tell us which of the two habits is more antisocial. ®

Think your smartwatch is good for warning of a heart attack? Turns out it's surprisingly easy to fool its AI

Better ask the human doc in the room