Who's watching you from an unmarked van while you shop in London? Cops with facial recog tech 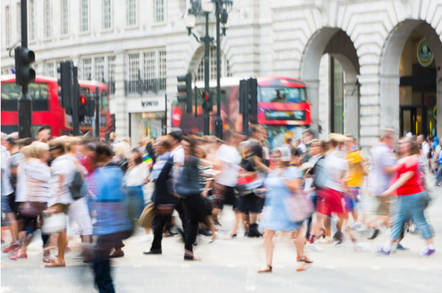 The Metropolitan Police are deploying the tech today and tomorrow in three of the UK capital's tourist hotspots: Soho, Piccadilly Circus, and Leicester Square.

The force has employed the tech – which scans people's faces against a list of individuals of interest to the police – on numerous other occasions, including at the Notting Hill Carnival and a shopping centre in Stratford, east London.

This time, the tech will be attached to vans and run for eight hours on each day as the Met said it needed to put the tech through its paces for a longer time period.

However, use in a live environment is controversial because of poor success rates and a lack of governance and regulation.

In May, a Freedom of Information request from Big Brother Watch showed the Met's facial recog had a 98 per cent false positive rate.

The group has now said that a subsequent request found that 100 per cent of the so-called matches since May have been incorrect.

A recent report from Cardiff University questioned the technology's abilities in low light and crowds – which doesn't bode well for a trial in some of the busiest streets in London just days before the winter solstice.

Even the cops don't expect great things – police commissioner Cressida Dick said earlier this year that she didn't think it would result in lots of arrests.

The lack of safeguards – such as rules on the retention and deletion of the biometric data collected – has led to legal challenges against forces using the tech.

"The police's use of this authoritarian surveillance tool in total absence of a legal or democratic basis is alarming," said Big Brother Watch director Silkie Carlo.

"Live facial recognition is a form of mass surveillance that, if allowed to continue, will turn members of the public into walking ID cards."

And it isn't just civil rights groups that are hot under the collar about such trials – defence think tank RUSI expressed concerns earlier this year that trials were going ahead in the field without a regulatory framework.

The Information Commissioner's Office has also launched an investigation into facial recognition.

Police forces have insisted the controversial kit is only being trialled, but opponents have rejected this since officers use it as a basis to approach people.

The Met has also justified its public trials by saying the public are aware of what's going on, saying of the latest trial:

However, campaign group Liberty pointed out that the van doing the scanning isn't marked and complained that the posters were not prominently displayed.

There are just three signs about to say what's going on, but they aren't exactly big enough to draw any real attention. And the police were not handing out any leaflets to members of the public until we asked where those leaflets were. #ResistFacialRec pic.twitter.com/noGBlE46uh

The Met said it was coming to the end of its trials – it had pledged to use it 10 times in 2018 – and has previously told The Register that an evaluation is due to take place at the end of the year. ®