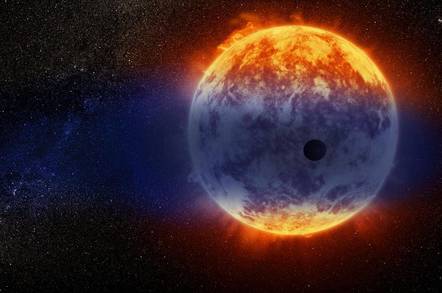 Somewhere in the Cancer constellation lies a mini-Neptune sized planet that is disappearing at rate faster than ever seen before, according to research published in Astronomy & Astrophysics on Thursday.

The exoplanet, known as GJ3470b, is located about 97 light years away. It’s a rare find as most exoplanets are either big and puffy like Jupiter or small and compact like Earth, whereas GJ3470b’s size falls somewhere in between - it’s about as 4.3 times as big as the Earth.

When a group of astronomers began studying exoplanet atmospheres, they spotted something strange happening on the warm Neptune-like one. “GJ 3470b is losing more of its mass than any other planet we seen so far; in only a few billion years from now, half of the planet may be gone," said David Sing, co-author of the paper and a physics professor at John Hopkins University.

It sits at “the edge of the evaporation desert,” a region where the solar rays emitted from its parent star, GJ3470, chip away at the planet's atmosphere. The energetic particles collide with the hydrogen atoms, breaking them apart by the process of ionisation. Over time, the escaping gas forms a giant cloud around the planet that shrinks like a deflating balloon.

For other types of exoplanets like hot Jupiters, which also orbit close to its host stars, the rate of evaporation can be as high as thousands of tons per second but the impact is much smaller. They’re massive enough that the shedding of material doesn’t affect its evolution in the long term.

Scientists estimate that GJ3470b is losing up to 10 billion grams of material every second, and up to 35 per cent of its current mass has already disappeared over its lifetime.

The rate is about a hundred times faster than another similar sized planet GJ436b that is orbiting a different star. In a few billion years left, there may be nothing left except the rocky core of GJ3470b.

Its low density makes it tricky to cling onto its atmosphere, and its parent star is also younger and more active than the one orbited by GJ436b. The solar wind is more powerful and destroys the hydrogen in its atmosphere more readily.

These planets are difficult to study as they can only be viewed via ultraviolet light. The researchers hope to continue observing GJ347b using Hubble and eventually the James Webb Telescope, which is expected to launch in 2021.

"I think this is the first case where this is so dramatic in terms of planetary evolution," said Vincent Bourrier, lead researcher and researcher at the University of Geneva.

"It's one of the most extreme examples of a planet undergoing a major mass-loss over its lifetime. This sizable mass loss has major consequences for its evolution, and it impacts our understanding of the origin and fate of the population of exoplanets close to their stars." ®