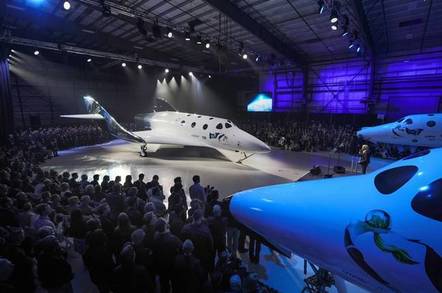 Virgin Galactic's SpaceShipTwo took its first trip into space today as the company launched the reusable rocket-powered craft on its fourth test flight above the Mojave desert in southern California.

The spacecraft (for that is what it now is) hit Mach 2.9 and reached 271,268ft (about 82.7km) above the Earth, before beginning its descent to an unpowered landing.

It has taken Virgin Galactic a while to get this point. The planned sub-orbital lobs have been delayed repeatedly since the passenger-toting rocketplane's lavish unveiling back in 2009 and the firm has had to overcome a number of setbacks, including an incident that led to the inflight destruction of its predecessor in 2014 and the death of one of the two pilots onboard.

A replacement craft, the VSS Unity, made its maiden flight earlier this year. Slung from the WhiteKnightTwo carrier aircraft, the rocketplane was hauled to 46,500 feet and then released. The pilots fired up the rocket for 30 seconds, keeping the nose pointed up, and reached Mach 1.87 before coasting to an altitude of 84,271 feet and gliding back to a landing.

Virgin Galactic has continued its incremental test programme and a third flight in July cracked Mach 2 as pilots kept the rocket burning for 42 seconds, powering through the stratosphere to an apogee of 170,800 feet.

The Kármán line, at 100km, has commonly been regarded as where space starts, but Virgin Galactic will point to discussions within the scientific community about revising this figure downwards to 80km.

Next they'll be saying Pluto isn't a planet. Oh, wait.

As well as ballast to represent paying passengers (or "talking cargo" as one commercial pilot memorably described those sat at the back of the aircraft), NASA sent a number of technology experiments to take advantage of the extended period of micro-gravity achieved during the sub-orbital flight.

Engineers did not plan for a full duration burn, leaving the eventual altitude up to sweaty-palmed boffins on the ground and the pilots at the pointy end of things as the craft's handling characteristics and thermal dynamics were carefully monitored.

The successful test has brought the oft-delayed dream of Richard Branson welcoming the first paying passengers onboard for an expensive sub-orbital jaunt that bit closer.

That day cannot come soon enough for Mercury 13 candidate Wally Funk, who booked her flight on Branson's dream machine back in 2012 and at 79 might finally get a chance to go to space.

It is almost 60 years since the US backed away from the idea of shoehorning Funk and her fellow female pilots into a Mercury capsule.

Sue Nelson's excellent book on the sorry tale, Wally Funk's Race for Space, is highly recommended for anyone seeking ideas for Christmas reading.

As for VSS Unity itself, Virgin Galactic confirmed at 16:14 UTC that the spacecraft had landed safely at Mojave Airport, a little over 10 minutes after touching space. ®