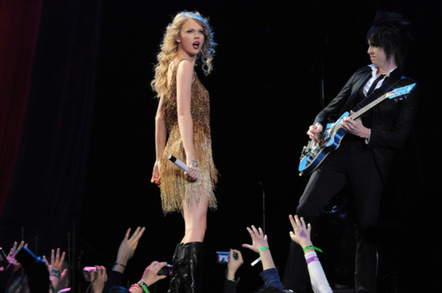 Spotify's one-time nemesis Taylor Swift has reportedly used controversial facial recognition tech on fans while they've been getting down to her sick beats.

According to Rolling Stone, the Rose Bowl venue in California rolled out the tech at her 18 May concert, in a bid to spot anyone on Tay Tay's long list of stalkers.

In what appears to be a nightmare dressed like a daydream, concertgoers' images were snapped up when they watched a display screening Swift's rehearsal clips, because there wasn't just a blank space behind – rather, a camera was hidden inside.

"Everybody who went by would stop and stare at it, and the software would start working," Mike Downing, chief security officer of an advisory board for concert venues, who saw a demo of the tech, is quoted as saying.

The images were then sent to a "command centre" and cross-referenced against potential stalkers. There is no detail of which company makes the kiosks, where the images are stored or how long they are kept for.

The move could create bad blood with Swifties who would prefer not to be covertly filmed, but the venue isn't the first to use face-scanning technology.

In August, it was revealed that the Tokyo 2020 Olympics will roll out automated systems from Japanese biz NEC to speed up security checks for staffers and athletes.

And in the UK, the police have been using the tech at major sporting events and demonstrations in the hope of spotting known troublemakers, while the Department of Homeland Security was recently reported to be testing it to track people walking in and around the White House.

The use of the technology is controversial, due in part to a lack of evidence that it works all that well, and the fact there is little in the way of regulation for the technology in the countries using it.

Meanwhile, as privacy becomes an increasingly mainstream debate, critics are taking the opportunity to emphasise how invasive the widespread use of such technology could be for large groups of people.

But perhaps Swifty would tell those with privacy fears to shake it off. ®