State TV can't decide whether it was duped or not 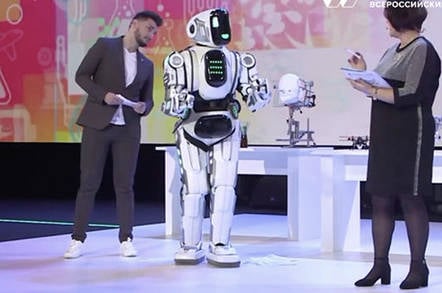 Video Every year Russia holds – and broadcasts on state television – a tech showcase of its latest products for an audience of hundreds of school kids.

This year's PROJECT show, which took place on Tuesday, was dominated by Boris the Robot, who was able to not just walk and talk but also dance and do math. He was, the show and the television noted, "the most modern robot."

Audiences there and at home were wowed by the advanced technology on display, and were even treated to a live robot dance. Later on, Boris engaged in conversation with the hosts about how robots and humans can work together. Eat your heart out, Boston Dynamics.

Except of course, this is 2018 and Russia, and the whole thing was, you guessed it, fake news.

Despite the conference organizers going to some lengths to imply Boris was a real robot reacting in real time to questions and occasionally noting with amazement at how he was "able to learn," the truth is that Boris was no more than a man inside a robot suit.

A pretty expensive robot suit, mind you. Suspicious Russian bloggers started digging into Boris – whose advanced AI had seemingly appeared from nowhere – and soon found that he wasn't the result of a secretive defense project but rather a fancy costume that costs 250,000 rubles, or $3,750.

Boris is in fact called Alyosha, and is one of a number of complex robot-like outfits produced by a company called Show Robots. Their designs include Star Troopers, Iron Man, Robocop, and various Transformers, and they are designed and sold by two enterprising young men who promote them on their own website.

Even though Boris is designed to look as if he is an actual droid, the fact that he had no external sensors and danced like, well, a man stuck inside of robot suit trying to dance like a robot, rather than a machine trying to approximate human dancing, raised suspicions.

Soon after the Boris-bashing began, a backstage picture emerged and was posted on a news agency website, further fueling online sleuthing and, remarkably, the state TV broadcaster pulled its recording of the event off the internet before changing its mind and putting it back up again...

And then, much as Americans have grown used to immediate water-muddying after seemingly embarrassing events, Russia embarked on a fake news on the fake news effort.

The conference had never actually said it was a real robot. And the audience was schoolkids: it was just a fun prop that people are taking too seriously. That is the current line.

But that ignores the fact that it was done in such a way that people went to trouble of checking whether it was real, and Boris was clearly believed by the audience to be an actual robot, otherwise what would be the value in a news agency hunting for and releasing the backstage picture?

And then there's the fact that the state TV presenters were clearly persuaded it was a real robot based on what they said and how they said it. Currently the organization can't decide if it should say that it was all just some fun and it was in on the joke, or whether it was bamboozled by the conference, or whether one of its anchors was simply confused.

And that is the world in 2018: where people go to great lengths to persuade you of one reality and then, when it is exposed, insist that they never did any such thing and it's all of you that are at fault for claiming it ever happened like that in the first place.

In this case it was harmless enough: a fake robot. But Russian TV has increasingly been creating entirely fake news segments and pushing them as real – a step that not even Fox News in the US has so far taken. Either way, it's bye-bye Boris and our hopes for a dancing robot this year. ®