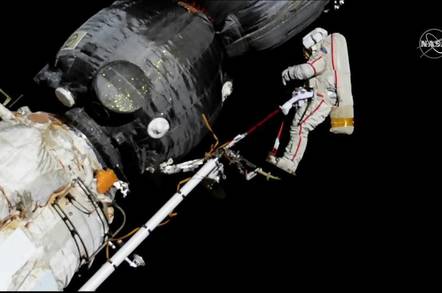 Spacewalking cosmonauts clambered outside the ISS yesterday to get an external view of the mystery hole drilled into the Soyuz, which is due to return three crew members to Earth next week.

Roscosmos flight engineers Oleg Kononenko (fresh from his launch aboard Soyuz MS-11 earlier this month) and Sergey Prokopyev popped open the hatch of the Pirs docking compartment of the ISS at 15:59 UTC on 11 December in order to get up close and personal with the orbital module of the penetrated Soyuz.

A leak was detected in late August when ground controllers noted a worrying drop in pressure aboard the orbital outpost. The crew hunted around the station and eventually found a hole in the wall of the orbital module of the Soyuz MS-09 spacecraft. The hole, which looked suspiciously like it had been created with a drill, was patched, and the Soyuz declared fit for purpose.

Russia has, however, wanted to take a look at the hole from the outside in order to understand how it got there. We'd suggest that somebody got a bit careless with a drill on the production line and tried to cover their mistake with filler, which popped out once on orbit. Others have speculated that maybe it was the ISS crew wot dunnit, a theory that attracted a suitably withering response from then-commander Drew Feustel.

Attached to foot restraints on a Strela crane, Kononenko had a go at the insulation of the Soyuz. The veteran cosmonaut, secure in the knowledge that he wouldn't be riding the thing back to Earth, used scissors and then a knife to cut through to the metal hull of the Soyuz module in search of the hole.

Looking on, Prokopyev joked that he couldn't watch as it was "his" spacecraft being ripped into while sharp-edged tools floated around the cosmonauts.

"We'll need to make it look pretty". Good luck with that.

The duo eventually extracted a briefcase-sized chunk of insulation to reveal the site of the hole. Photos were snapped and samples taken to aid ground-based engineers in their investigation, although it appears that the risky spacewalk may have been for naught as there was little visible to add to what was already known.

With time running short, the 'nauts headed back inside the ISS, closing the airlock hatch at 23:44 UTC, marking the end of the 213th EVA in support of the station.

Soyuz MS-09 is expected to depart the station next week, carrying ESA's Alexander Gerst, NASA's Serena Auñón-Chancellor and Sergey Prokopyev back to Earth. The crew, sealed inside the descent module of Soyuz, will be in no danger from the mystery hole, since the orbital (or habitation) module is jettisoned just after the spacecraft completes its re-entry burn. ®