Doubles all round for the server-makers: Market inhales $23.36bn for the quarter

The continued data centre refresh cycle and seemingly insatiable demand from the big cloud slingers to bulk out their infrastructure saw server vendors make hay while the sun shone in Q3.

Dell, which yesterday was given the go-ahead by Class V shareholders to buy up their stock and go public later this month, led the market, growing revenue by 33.3 per cent to $4.09bn and units by 10.5 per cent to 556,000.

This is the third straight quarter since Dell knocked HPE off its perch: HPE revenue was up 14.8 per cent to $3.8bn but its shipments fell 9 per cent to 456,200. HPE has pulled away from the low-end server market.

Over at IBM, server revenues jumped 9.4 per cent to $1.196bn, but Big Blue didn't register in the top five biggest sellers in terms of the numbers of systems sold.

Huawei and Cisco were seen as virtually tying with IBM with revenues of $1.052bn and $1.04bn, up 75.6 per cent and 4.8 per cent respectively. Huawei flogged 187,900 servers but Cisco's unit numbers meant it was outside of the top five and therefore not mentioned.

The remorseless rise of the ODM Direct section - Chinese contract manufacturers that build servers to order – continued, growing 30.5 per cent to $6.25bn, and accounted for 871,500 units. The others section made up the rest of the sector.

And a unit shipment chart: 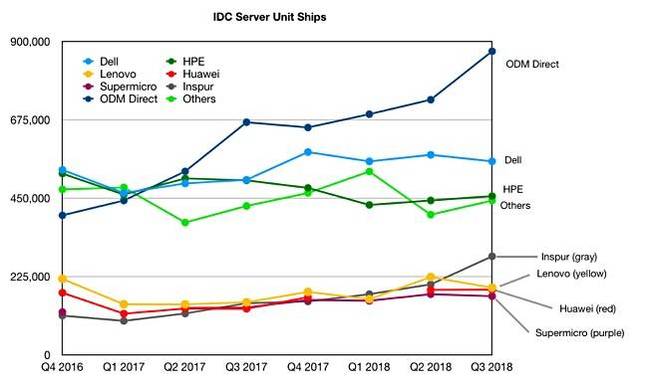 Geographic numbers show the dominance of Asia, and China in particular, in terms of growth rate, but IDC hasn't released the actual revenue numbers.

Asia/Pacific (excluding Japan) was the fastest growing region with 46.5 per cent year-on-year revenue growth. The US grew 43.7 per cent, while Europe, the Middle East and Africa (EMEA) grew 24.5 per cent.