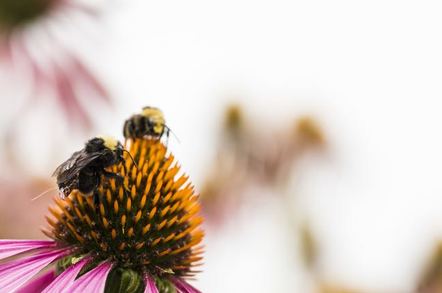 Boffins at the University of Washington have developed a portable sensor system for bumblebees, an improvement on previous research that saddled bees with GPS tracking chips, if not a prelude to the autonomous drone insects depicted in Black Mirror.

The researchers – Vikram Iyer, Rajalakshmi Nandakumar, Anran Wang, Sawyer B. Fuller, and Shyamnath Gollakota – undertook the project because insect-size drones run out of power after after 20 to 30 minutes in the air while living insects lack that limitation. They presented their findings in a paper on Tuesday and intend to do the same in-person next year at the ACM MobiCom 2019 conference.

"We show that our platform is capable of sensing, backscattering data at 1 kbps when the insects are back at the hive, and localizing itself up to distances of 80 m from the access points (APs), all within a total weight budget of 102 mg," the researchers explain in their paper.

Their bumblebee sensor pack, based on a Kinetis KL03z ARM Cortex M0+ microcontroller, weighs 102 mg, 70 mg of which consists of battery weight. The remaining space is taken up by sensor electronics that can monitor temperature, humidity and light intensity – data useful in agricultural applications.

The system allows the 30 kilobytes of collected data that fit in the limited electronics to be downloaded via backscatter – powered by radio waves transmitted from a nearby antenna – once the bees return to the hive.

That's also when the battery – which lasts for up to seven hours – can be recharged wirelessly.

Bee boffins prove sesame-seed brain is all you need to play football (well, that explains a lot)

Because the researchers put a premium on power efficiency, their sensor pack design lacks power-hungry high frequency oscillators that typically provide the signal phase information used for localization. Thus the boffins came up with a technique for calculating a bee's angle from an AP using the amplitude information output by the envelope detector in the sensor pack.

"By changing the relative phase between the two transmit antennas at the AP, we can create amplitude changes at the insect’s envelope detector over time," the researchers explain. "These amplitude changes effectively give us multiple equations that allow us to solve for the angle to each AP."

The University of Washington's bee boffins anticipate that it will become feasible to use solar cells in place of rechargeable batteries and they anticipate testing tiny cameras, specially the Himax HM01B0 and Centeye image sensors, for live data streaming.

The intrepid bug couturiers also note that while animal abuse policies do not apply to insects and other invertebrates – tough luck, lobsters – they try to minimize harm done to their surveillance bees. They say they make no surgical modifications to their bees and remove electronics after experiments.

But if it becomes practical to bug bugs thus, expect to see a lot more flyswatters. ®