Microsoft shows no sign of yielding its enterprise chat and conferencing users to a hipster-friendly upstart like Slack. A snapshot of US businesses who use work chat shows that Microsoft's Teams is taking advantage of Google's enterprise missteps rather than those of Slack.

Skype for Business – formerly Office Communicator and Lync – is used by more enterprises than two years ago, according to a Spiceworks survey, with Microsoft Teams growing like topsy after less than two years. Microsoft is gradually migrating users of the former to the latter. But combined, Microsoft's two chat platforms are used in 65 per cent of businesses, compared to 39 per cent two years ago. Slack has increased its penetration from 13 to 15 per cent, and is far behind Teams.

Teams is free with Office 365, so for no additional cost enterprises gain unlimited message retention and search. Slack charges for these features. This year Microsoft unbundled Teams from Office completely, essentially creating a free rival to Slack without Slack's key limitation, but at no cost. Microsoft places per-user storage limits on the free Teams, but allows those users to search years of chat archives, unlike Slack.

The survey shows how badly Google has handled its business. Google’s Hangouts was far more popular with larger enterprises than small businesses, but its overall penetration has fallen from 16 per cent in 2016 to 11 per cent today. 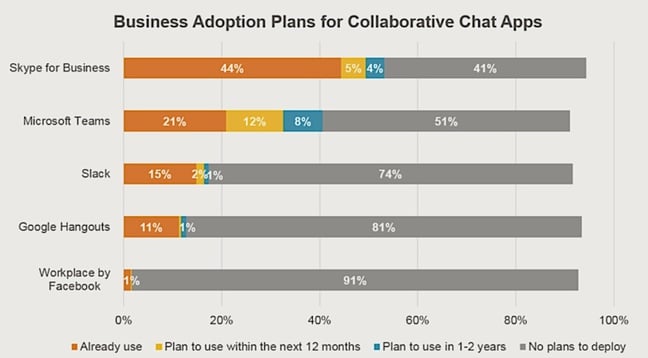 The road is littered with the bodies of deceased or dying messaging clients: Yammer and GroupMe at Microsoft, Allo and Duo and Talk at Google. There may be more. As we wrote some 18 months ago, the only thing making Microsoft’s messaging strategy look logical was Google: “If Microsoft for once looks coherent, it's because its business rivals have been chaotic.“

Google subsequently killed off Allo as it beefed up its SMS phone client and last week had to deny reports it was killing Hangouts for Consumers, instead repositioning the offering.

Slack charges £63 or £117 per user per year (billed annually) for its Standard and premium (Plus) packages – the latter adding compliance, message export and a four-nines uptime SLA.

Ominously Teams will benefit the most, respondents suggested. By the end of 2020, 41 per cent or organisations expect to be using Teams, and just 18 per cent using Slack.

The Flickr founder's startup launched with the mission to destroy email, arguing that chat was more productive. Slack generated huge interest by rationing access, launching as a closed, invitation-only trial. But it has added little to the product since, as we noted in July, when we asked: "How do you add value to a product that pretty much already does what it set out to do?"

Slack may have to provide an answer soon, as it has reportedly hired Goldman Sachs for an IPO that values the company at "well over $10bn". Good luck with that. ®