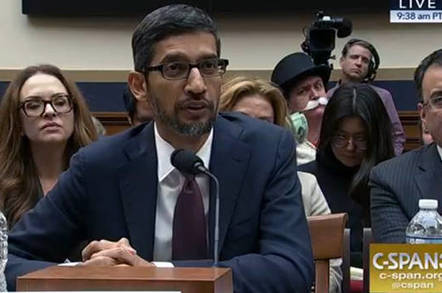 Monopoly Man is fourth from the right

Google's CEO Sundar Pichai appeared in front of a Congressional hearing this morning in a session that revealed two main things: he is still going to take the company into China, and Congresscritters have absolutely no idea what they are talking about when it comes to technology.

The marathon three-and-a-half House committee session was in-part fascinating and in-larger-part cringeworthy as Pichai picked his way around controversial issues and side-stepped serious questions over the search giant's actions, while remaining remarkably polite and accommodating in the face of incoherent rants and questions that bore no relation to objective reality.

Most telling was Pichai response to a direct question about whether Google would abandon its secretive program to provide China with a special censored version of its search service, called DragonFly.

DragonFly has caused the company a significant headache after its details were leaked and Google employees went publicly with their condemnation of what they see as assisting an authoritarian regime in its efforts to stamp out dissidents. Just as significant for many Google employees was the fact that the company kept it secret – going against its cultural norms of openness - and may even have misled or threatened employees to keep the project on track.

Pichai was revealed to be a key defender of the project, a position that may put him on a crash course with Google founder Sergey Brin who pulled Google out of China in 2010 in response to interference by the government.

But this morning, Pichai refused to say the project would be ditched and was unapologetic about it. Representative David Cicilline (D-RI) had a telling exchange with the chief exec in which he asked repeatedly if Google was continuing to develop the program.

Cicilline: Are any employees currently having product meetings on this Chinese project and if not when did those end?
Pichai: We have undertaken an internal effort, but right now there are no plans to launch a search service in China necessarily.
Cicilline: Are there any current discussions with any member of the Chinese government on launching this app?
Pichai: Currently we are not in discussions around launching a search product in China.
Cicilline: Are there any current discussions with members of the Chinese government about this?
Pichai: This effort is currently an internal effort. I’m happy to, you know, consult, be transparent as we take steps toward launching a product in China.

Eventually, Cicilline flat out asked Pichai: "Will you rule out launching a tool for surveillance and censorship in China while you’re CEO of Google?"

And Pichai responded by giving a vague answer that meant "No, once the furore dies down, we will figure out how to do it."

He said: "One of the things that’s important to us as a company, we have a stated mission of providing users with information, and so we always think it’s our duty to explore possibilities to give users access to information. I have a commitment, but as I’ve said earlier on this we’ll be very thoughtful and we’ll engage widely as we make progress."

It remains to be seen how Google employees – who have been egging one another on to quit over the issue – will react.

Aside from a brief and purposefully vague suggestion that Google would support a federal privacy law, much of the hearing was taken up with overblown and highly partisan claims that Google was "censoring conservative voices" – a recent talking point of right-wing pundits.

Congressman offered a variety of anecdotal examples to claim that Google had a secret liberal agenda but Pichai refused to bite and denied there was any inherent political bias within Google's products.

"It's not possible for an individual employee or group of employees to manipulate our search results," he noted, receiving the pointless response "I disagree" from Representative Lamar Smith (R-TX) who cited a highly questionable report as his evidence.

Just as ridiculous was a question asking why a Google search result on the word "idiot" brought up images of President Trump. Ridiculous because, given the current political situation, if those images didn't appear then Google would in fact be skewing and censoring results: the very approach that Congressmen appeared to be so angry about. From there, Pichai wisely left it up to other Congressman to bicker between themselves over the matter.

Political theater aside, the rest of the session was remarkable for only one thing: Representatives willingness to display their dangerous ignorance of how technology works.

As people have increasingly opined, the stunning lack of knowledge about the basics of technology, especially when it comes to the internet and online tools, is actually a limiting factor in Congress being able to do its job.

On more than one occasion, a Congressman railed at Pichai insisting he explain their confused and inaccurate ramblings while holding up their phone. On two occasions it was an iPhone – which is, of course, made by Apple and has nothing to do with Google. "Congressman, iPhone is made by a different company," Pichai said in response to one question from Representative Steve King (R-IA).

The other meandering questions are too dreadful to transcribe but as just one example, one Congressman asked Pichai if Google's privacy policy applied "when someone clicks a Doubleclick cookie?"

It's not hard to see how the representative garbled a point about how Google claims one thing and does another when it comes to user privacy, especially when it impacts its core advertising revenue, but it is indicative that there is little point in aggressively questioning the CEO of a company when you have no idea how their market works.

Adding to the general sense of farce, a man dressed as Monopoly Man, complete with a bag of fake cash, a top hat and a monocle sat a few rows behind Pichai, pulling various faces in an effort to photobomb proceedings.

Reflecting that Washington DC has become one big reality TV show, Roger Stone and Alex Jones also reportedly turned up to the hearing. That's pretty much sums it up. ®