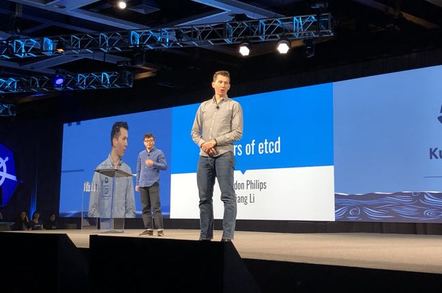 At the Cloud Native Computing Foundation's (CNCF) KubeCon + CloudNativeCon North America 2018 meetup on Tuesday, the CNCF revealed it will adopt, shelter and nourish an itinerant jumble of letters known on the street as "etcd."

Pronounced "et-cee-dee" among those who dare speak its name, etcd is a distributed key-value store. It hails from the Linux /etc/ directory, which lives in the root folder and stores configuration files and related subdirectories.

This particular bit of open source software turns out to be useful for storing data across clusters of computers, a concern for a growing number of organizations thanks to Kubernetes, Docker, and the like. So the open source community has some interest in keeping etcd on track and out of trouble.

"etcd is being contributed to the CNCF today," said Brandon Philips, CTO of CoreOS at Red Hat, during the keynote presentation. "The pull request merged. This will ensure mutual governance of the domains and the IP of the project moving forward."

The software originated at CoreOS, which earlier this year was acquired by Red Hat. Handing governance over to a neutral third-party overseer should help make etcd more palatable to those wary of projects still tied to specific vendors. Philips said the project should benefit from a third party security audit and third party correctness audit.

Not quite ready yet

Etcd is being adopted as an incubation-level project. Incubation-level indicates that a software is further along than sandbox-level but hasn't yet graduated, as Kubernetes, Prometheus, and Envoy have done.

"That full stack isn't complete and comprehensive yet," she said. "The CNCF projects represent important building blocks of a cloud native environment."

To understand etcd's place in the Kubernetes ecosystem, consider that Brian Grant describes it as "a source of truth for systems like Kubernetes." And Grant has some idea about such things: He's a principal engineer at Google (where Kubernetes was born), a representative of the TOC, co-chair of the Kubernetes Architecture Special Interest Group, and a member of the Steering Committee.

Little ol' etcd keeps track of Kubernetes cluster state data, replicating it across machines and using the Raft consensus algorithm to ensure multiple servers agree with one another about the state of things.

The Raft consensus algorithm was once, and may still be, one of a set of search terms that, if entered one after another, will prompt Google Search to solicit you to answer a technical challenge for possible recruitment.

Because etcd is used by every major cloud provider and companies like ING, Pinterest, and Nordstrom, it's being brought in under the CNCF umbrella to be taught to play nicely with others and to be steered toward great things.

And in other news

For the Linux Foundation, the arrangement allows it to provide a standards organization template, so open source projects can check the necessary boxes that will allow them to move technical standards forward.

In the post-keynote chatter, a handful of industry analysts wondered aloud why no corporate customers had shown up on stage to talk about how they were using the cloud native stack. As one said, "It was a missed opportunity" given that last year Kubernetes was "still science experiments."

It's also still a children's story, because normal people find Kubernetes and its various components baffling. The keynote concluded with Matt Butcher, principal software engineer at Microsoft, and Karen Chu, community manager at Microsoft, reading from an illustrated children's book they created called "Phippy Goes to the Zoo." It's a follow-up to 2016's "The Children’s Illustrated Guide to Kubernetes."

They then revealed that Microsoft in its benevolence has donated all the rights to Phippy and friends to the Cloud Native Computing Foundation. Try to contain yourself. ®