As KubeCon + CloudNativeCon draws nigh, vendors can't contain themselves 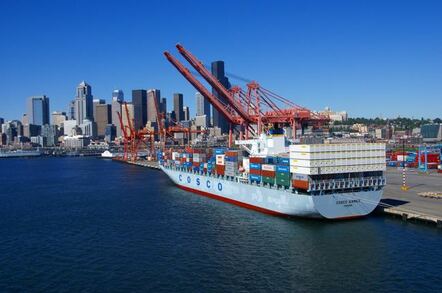 A container ship docked in Seattle

A number of open source types are heading toward Seattle, Washington, on Monday, if they're not already installed there, to attend the Cloud Native Computing Foundation's (CNCF) KubeCon + CloudNativeCon North America 2018 confab.

The forecast for the cloud-centric event is rain, with widespread Kubernetes. The gathering begins Tuesday, not counting preparatory cocktails. Nonetheless, a press release downpour should arrive on Monday in which less consequential announcements get served as hors d'oeuvres.

The CNCF, part of the Linux Foundation, oversees a variety of projects, through none so popular as Kubernetes, the open source container orchestration system initially developed by Google. The non-profit in August said some 58 per cent of 2,400 surveyed respondents in the IT biz admitted to using Kubernetes in production, which in part explains why practically every vendor attending the show has something to say about K8s. That's how the container-fluent often refer to the technology because it can become really tiresome to say Kubernetes over and over, or to have to type it out repeatedly.

Because Kubernetes is rather complicated, there's no shortage of companies promising to simplify it. Banzai Cloud plans to announce a public beta of its Pipeline platform, which automates some of the Kubernetes drudgery involving configuration, logging, monitoring, and security.

Meanwhile, a company called Containous is expected to make noise about the public beta of Traefik Enterprise, a bells, whistles, and fees version of its cloud-based Traefik router.

A company called Loodse should show something similar, its Kubermatic Container Engine for Red Hat OpenShift. And then there's Kublr, which sounds like well-known cookie company after a vowel fire sale but in fact refers to an enterprise Kubernetes management platform and the biz behind it. Kublr version 1.11 brings some automation and control enhancements to the chore of deploying Kubernetes clusters in multiple environments.

Keeping with the all-Kubernetes theme, Rook, the storage orchestration system for Kubernetes, should announce its Ceph support is now stable, putting it on par with other storage options Cassandra, Nexenta EdgeFS, and NFS. Ceph is a distributed storage system in case you were wondering.

A Kubernetes security biz, NeuVector plans to announce containerd and CRI-O run-time support. StorageOS, which offers storage for containers – did someone say Kubernetes? – is expected to launch the StorageOS Cluster Operator, which is a tool for packaging, deploying, and managing container-oriented storage. And let's not forget KubeMQ, which is launching an enterprise-flavored message broker for containers, because people may want to send data back and forth between all their imaginary machines.

Elastic is bringing out alpha versions of Elasticsearch and Kibana Helm charts; Kong wants to talk about Kong Cloud, a managed service for its Kong Enterprise API platform (for controlling APIs); and HyScale is launching is app delivery platform, to help containerize and shift lots of apps applications to Kubernetes.

A handful of other product declarations can be expected later in the day. Oh, lest we forget, Google Cloud is planning to offer Istio in beta form on GKE, its managed Kubernetes service.

The Register will have more to say about this sort of thing on Tuesday. ®