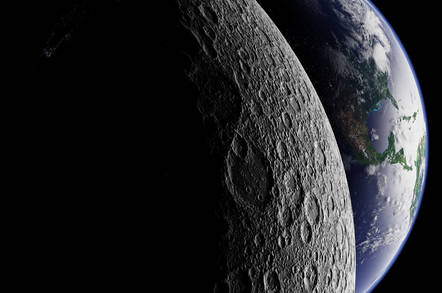 China has successfully launched a spacecraft aiming to become the first lander to touch down on the far side of the Moon.

The Chang’e probe was shot into space aboard a Long March 3B rocket on 7 December from the Xichang Satellite Launch Center, a spaceport nestled in the Sichuan province. It’s expected to enter the Moon’s orbit by 11 December and will attempt to rest a robot and a lander on the lunar surface shortly afterwards.

China's Chang'e-4 lunar probe, launched in the early hours of Saturday, is expected to make the first-ever soft landing on the far side of the moon. Check out the tasks of the mission. https://t.co/t7nMGAj14O pic.twitter.com/I0fIf0350W

The Chang’e-4 spacecraft will land at the South Pole-Aitken basin, an impact crater that has fascinated scientists for its size and age. If successful the probe will be the first to the far side (not the dark side - an adjective used to describe its uncharted state rather than its sunlight level).

In the early space race the US did send the Ranger 4 probe to the far side, but it was destroyed after crashing into the regolith. The first human eyes to see the far side were the crew of Apollo 8, and one of them told Arthur C. Clarke that they had debated radioing back news of a large black monolith on the surface, having seen the film 2001 before launch, but that wiser heads prevailed.

The giant hole stretches for about 2,500 kilometers (1,550 miles) across and 8 kilometers deep (5 miles), covering nearly a quarter of the Moon’s surface. It is believed to be the oldest impact crater, carved around 3.9 billion years ago during the Late Heavy Bombardment, a tumultuous time where terrestrial planets were blasted by asteroids.

The ancient collision tore through the crust and exposed some of the satellite's inner mantle. Astronomers hope that the studying this area will reveal more secrets about the Moon’s internal structure and formation. It's also expected to contain a lot of helium 3, which could be a useful fuel for fusion reactors.

Cameras carried by both the rover and lander will inspect the Moon’s local environment. The rover will probe the Moon’s surface; a spectrometer will analyze the chemicals on its surface and its ground-penetrating radar will explore underground.

The lander, on the other hand, will study coronal mass ejections from the Sun and carries a series of plant seeds and silkworm eggs to see whether they can both mutually survive alongside each other. The insects provide carbon dioxide to the plants and in return, the plants release oxygen for the insects.

There are technical difficulties to venturing far on the Moon. Since the Moon is tidally locked with the Earth, we only see the same side every night and even with wobbling Earth-based telescopes can only see 59 per cent of the Moon's surface. It makes direct communications with the lander from Earth impossible.

Before the Chang’e-4 spacecraft was sent to space, Chinese scientists propelled the Queqiao, a relay satellite earlier this year in June. Queqiao is a 4.2 meter antenna in a special elliptical orbit further away from the Moon. The satellite will act as a bridge, receiving and transmitting signals between the rover and lander and Earth.

Chang'e-4 is preceded by three other spacecraft. The mission is part of a wider program that will send future probes to collect lunar samples and, ultimately, land astronauts on the Moon.®