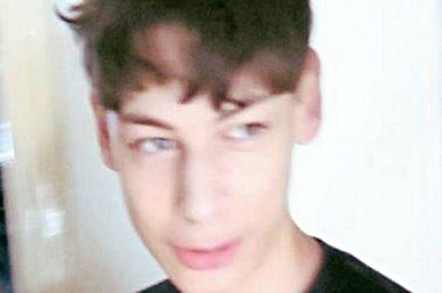 Jailed: George Duke-Cohan, 19, of Garston, was sentenced to 3 years in prison today

A teenage bomb hoaxer from Watford who taunted the UK's National Crime Agency on Twitter while pretending to be a hacker crew called Apophis Squad has been jailed for three years.

George Duke-Cohan, 19, from the village of Garston, near Watford, just north of London, previously pleaded guilty to making three bomb hoaxes, including one in August against a transatlantic United Airlines flight that resulted in all 295 passengers aboard being exhaustively searched by US police workers after the flight landed.

His Honour Judge Richard Foster, sentencing, said that police investigating the bomb hoaxes had also found a Discord server on which Duke-Cohan used the handles "geor", "Trident" and "Plexit".

"You accept responsibility for the hoaxes and claim that you are a psychopath with a history of killing small animals," said the judge as he prepared to hand down sentence.

Sitting at Luton Crown Court to sentence Duke-Cohan, the judge told the teenager this morning: "You enrolled to study for a Diploma in Information Technology at West Herts College in Watford in September 2016. In October 2017 the college's website experienced a so-called 'denial of service' attack for which you were identified as the perpetrator. Whilst still on that course on 31st January 2018, the college received a bomb threat which was taken seriously – 2,500 students and staff had to be evacuated. You admitted being responsible for the hoax email."

Duke-Cohan's bomb threat against United Airlines included him making a phone-call to San Francisco authorities in which he took on "the persona of a worried father and [claimed] his daughter contacted him from the flight to say it had been hijacked by gunmen, one of whom had a bomb," said the National Crime Agency in a previous statement.

He also emailed "over 1,700 schools and other educational establishments" in March this year "threatening to set off an explosive device if payment was not made as directed", before calling police two days later "asking for advice because you thought your phone had been hacked, although you denied any involvement in the bomb threats".

When police arrested him the following day for the bomb threats and examined the contents of one of his mobiles, they found evidence linking him to the Apophis Squad Twitter handle, where he had claimed responsibility "for targeting 24,000 schools in both this country and the USA".

For sentencing purposes, the judge accepted a forensic psychiatrist's report which suggested that Duke-Cohan suffers from an autism spectrum disorder, commenting: "[T]o say that this is an excuse for what you have done is an insult to the many thousands of sufferers who lead law abiding lives."

Dr Tim Rogers, the psychiatrist, found in his report on Duke-Cohan that the teenager "alluded to ordinarily hidden feelings of insecurity, shame, vulnerability and humiliation that had given rise to fantasies of (and a search for) success, power, acclaim from prominent hackers and the achievement of wider online notoriety".

Describing Duke-Cohan's "fascination with computer hacking and your motivation of seeking notoriety" as evidence of "[his] high culpability" for his crimes, HHJ Foster sentenced him to three years in prison, of which he must serve half before being released on licence. With approximately three months on remand being taken into account, Duke-Cohan could be out of prison by May 2020.

His computers and devices were ordered to be destroyed and a criminal behaviour order was made. ®

Actual reports of transgressions are up, though

National Crime Agency: Your kid could be a nasty interwebs hacker

Do they like coding? Or play with computers a lot?