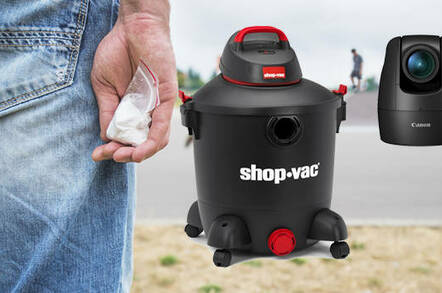 Next time you're closing a big drug deal you may want to watch the cleaner. Or more specifically their vacuum cleaner.

That's right, because thanks to publicly available federal acquisition records we now know that America's Drug Enforcement Agency (DEA) has planted cameras in cleaners. Canon cameras in Shop-Vacs appear to be the latest tool in the drug war.

To be fair, we don't know it's a Shop-Vac for certain because like the brand "Hoover," "Shop-Vac" has become a generic term for a heavy-duty vacuum cleaner. The DEA could be planting surveillance equipment in a Rigid, a Craftsman or even a Stanley. What we do know for sure is that is a Canon M50B.

And we know that because it lists "custom shop vac concealment with Canon M50B" in the contract, dated November 28.

It's a good choice: The Canon VB-M50B is a network camera so video can be live-streamed - presumably to agents parked in a van nearby – and it has a very large aperture ratio, meaning that you get good color and clarity out of it even in low-light situations.

It has a pretty good 88.5mm zoom so it can pan, tilt and pick out details from some distance away – maybe 50-100 feet. Not quite zoom-and-enhance territory but good enough it seems. And the camera has object detection built in. If you were going to install any surveillance camera inside a vacuum cleaner, this would be the one.

The contract is for $42,595. Even a top-of-the-range Shop-Vac will only set you back a few hundred bucks but the Canon is a high-end bit of kit costing $3,400. So guessing that the company building the machines - Special Services Group, based in Denair, California (near Modesto) – is putting a 50 per cent mark-up on the machines for carefully outfitting the cleaners with hidden cameras, that means there will be six DEA max surveillance cleaning machines out there.

It's actually a pretty smart move: Shop vacs typically have two openings – one that sucks in air and one that blows it out. The truth is that people rarely, if ever, use the blower setting so you could easily fit a camera in there that can see clearly through the hole while being undetectable without close inspection.

And of course, no one thinks anything of a shop vac in an industrial setting. We're guessing that the people the Superspy Shop-Vac is intended to film spend a lot of time in warehouses.

The question of course is, where would the air exit from? There would need to be some air coming out of the hole of the vacuum cleaner wouldn't be usable - it couldn't provide any suction (we literally just tested this with a Shop-Vac and some duct tape). That where the expertise of Special Services Group comes in, no doubt.

The company pitches itself as a "leading supplier of technical solutions for law enforcement, military and government agencies in the United States of America" and notes that it is "known for our superior products." Aside from specially modded vacuum cleaners, it's not clear what those products are, but there are lots of thrusting pictures of men with guns on the site so it's safe to assume it's weaponry of some kind.

Anyway, we're willing to bet that the boys at Special Service Group are already hard at work figuring out how to exit the air so the shop vac works – either around the edges of the camera installed in the blow exit or perhaps out other carefully designed holes.

But while we're celebrating Special Service Group's contract win, spare a thought for Cowboy Streetlight Concealments, based in Texas. They also went for the contract, based no doubt on their previous contract wins with the DEA and law enforcement in which they… well, the name kind of gives it away – secretly install cameras in streetlights. Presumably to catch drug dealers on street corners.

But Cowboy Streetlight Concealments didn’t get the gig. Maybe they are trying to branch out from streetlights into other secret camera installations. Why not? That's where the market is these days. Speed signs, traffic barrels, anything that you don't notice but in which you can shove a camera.

But what is most amazing about all of this is that it proves every single 1980s crime movie was right: government agents really are posing as cleaners to catch the crooks. Let's clean up the streets boys – literally. ®