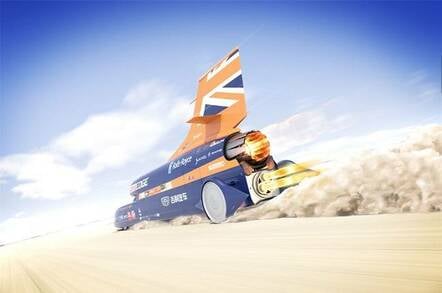 Not coming to a desert near you soon

Bloodhound, a British project to strap a rocket to a car and fling it at the horizon, is officially dead, as administrators finally pulled the plug on the venture.

The project entered administration in October and now, alas, it looks as though time has run out to find the remaining cash needed to mount an attempt on the land speed record, currently held by Wing Commander Andy Green.

Green was the first person to break the sound barrier on land back in 1997 in Thrust SSC, developed by a team led by Richard Noble.

Back in October, chief engineer Mark Chapman and joint administrator Andrew Sheridan, reckoned that £25m was needed to get the car completed and running on the 18km long desert track in the Northern Cape province in South Africa.

£25m could buy you some digs in London's Notting Hill or some select slices of some very sought-after footballers. Or it might buy you a bolt or two for UK Chancellor Philip Hammond's multi-billion pound Brexit war chest.

Unfortunately, the sum could not be scrounged up to allow Bloodhound's Nammo engines to be bolted to the Bristol-based rocket-car and Green to have a go at cracking 1,000mph.

The Register was told that the decision to axe the project was taken in the last 24 hours. Joint administrators Andrew Sheridan and Geoff Rowley issued a statement this morning saying: "[E]fforts to secure an investor to take the project forward have not come to fruition."

Sheridan went on: "Despite overwhelming public support, and engagement with a wide range of potential and credible investors, it has not been possible to secure a purchaser for the business and assets."

The Register has been told that at the point of administration, the company owed in the region of £4.5m, but "in the current climate and with significant investment of c.£25m needed to deliver the project's ultimate goal, none of the interested parties have been in a position to support the project in moving forward."

The next step will be to hand back third party equipment to the likes of Rolls Royce and the UK Ministry of Defence and sell off the remaining assets.

With "overwhelming" public support failing to translate to cold, hard cash it is, sadly, the end of the road for Bloodhound. ®