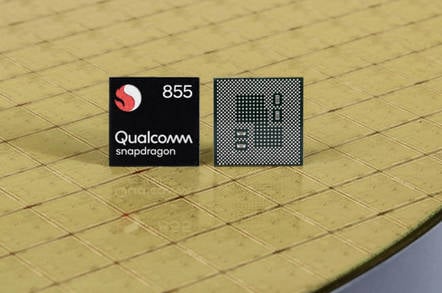 Yesterday, Qualcomm teased its Snapdragon 855 processor, which is aimed at next year's top-end 5G Android phones. Today, we've got hold of more details of its insides.

Qualy reckons these specifications will set a high benchmark for next-gen devices from Apple and other gadget manufacturers using non-Snapdragon chipsets to compete against. The 855 is expected to appear in handhelds from Samsung, Motorola, HTC, Asus, Sony, and so on, over the next 12 months.

So, the specs. It's a 7nm system-on-chip with eight cores: one main "prime" CPU core clocked at up to 2.84GHz, three beefier cores running up to 2.42GHz, and four smaller cores are clocked up to 1.8GHz. It's pretty much like the Arm Big.LITTLE architecture, with four small cores running apps and the operating system, and the larger cores only powering up temporarily to run intensive code.

The prime, large, and small cores are grouped so that there are three separate clocks driving each domain, and each core can be individually powered up and down. This saves the battery by not sucking full power all the time, and should keep temperature and throttling under control.

The CPU cores, which form the 855's Kryo 485 unit, are based on Arm's 64-bit Cortex-A blueprints, with tweaks here and there to fit them into the system-on-chip. For example, there is a larger out-of-order execution window, and changes to the data pre-fetcher, to suit patterns of code in mobile applications. Qualcomm tries to tune its CPUs to match web browsing and apps, which tend to branch a lot, bouncing between libraries and information-parsing routines.

Specifically, the prime and large cores are based on Arm's Cortex-A76 CPU designs, and the small ones are Cortex-A55s.

The 5G electronics use millimetre-wave and sub-6GHz signals, although this feature will be useless until you get a working and useful 5G network in your area. These are supposed to roll out gradually in capitals and other big cities in the US, UK, Europe, Australia, and Asia over the next two years. For mm-wave, it supports 800MHz of bandwidth (using 2x2 MIMO), and 100MHz for sub-6GHz (using 4x4 MIMO).

As for the graphics, there's an Adreno 640 GPU that talks low-power Vulkan 1.1, OpenGL ES 3.2, and OpenCL 2.0 FP. It can render to a builtin 4K HDR display and up to two 4K external monitors, using 10-bit-per-RGB-channel-per-pixel and Rec. 2020 color. There's hardware accelerated VP9 and H.265 video and movie decoding, HDR10+ playback, 8K 360-degree rendering at up to 120 FPS for driving virtual reality gear, and various HDR standards support.

The GPU also supports something call physically based rendering, in which textures on models are lit according to their real-world material properties. This relies a library of pretty much every known material on Earth, and details on how light scatters when it hits their surfaces.

For example, the library will describe how wood, gold, steel, and so on, should reflect and affect light hitting them. Plug it all together and games and similar applications can efficiently and realistically render textures on screen for any given in-world lighting. It's just another tool for games developers to tap into.

The SoC has a Spectra 380 image processing unit, which can take in 22MP 30 FPS video from dual cameras, or 48MP from a single camera. That's according to internal specs we've seen; we note the public marketing claims up to 20MP from dual cams or 32MP from a single camera. It can also record in slow-motion: 480 frames per second albeit at 720p HDR.

It has built-in computer-vision hardware acceleration for object detection and tracking, and stereo depth detection and processing. Apps can tap into this to do augmented reality stuff without killing the battery: The calculations are offloaded to silicon dedicated to doing it efficiently.

Software can also use this computer-vision engine to do things like replacing the backgrounds in photographs, and other on-device fiddling of pics and vids. If someone's standing in front of a boring wall, just switch it out for a mountain or something, and create your own fake news, er, views.

So, basically: folks can take and playback 4K video at up to 60 FPS with 10-bit color depth, Rec. 2020 color, using HDR10, HDR10+ and HLG standards. The hardware can, therefore, record and render video and images with more than a billion shades of color thanks to the 30 bits-per-pixel range.

The chipset also handles HEIF – High Efficiency Image File Format – video and photos. These are essentially containers that can hold multiple pics and footage, plus metadata from sensors such as depth, all in a compressed file. Wide-angle and close-ups can be snapped at the same time and stored in these boxes. The idea, we guess, is that you don't lose your high-quality originals while sharing them in different formats.

And, of course, artificial intelligence

Then there's the Hexgaon 690 with tensor math acceleration for speeding up machine-learning software, plus four vector math units, and hardware for processing voice audio from the microphone. This fourth-generation AI inference engine can in addition handle four scalar math threads at a time, and exceed seven trillion 8-bit integer tensor operations per second. The previous generation didn't sport a tensor unit, and had two vector math units.

The point of all this is to do more AI inference on phones and tablets rather than beam it back to a cloud for processing; this decreases latency, avoids the compression of images and other content in order to fire them over the air and internet, and increases privacy somewhat by keeping data on the device.

It can also be used to take out background noise from phone calls and conversations with voice-controlled personal assistants: you can be in a noisy bar or sports game, and the Hexagon 690 can process the audio to filter everything out except your speech during a call or query in real-time.

There's also silicon for identifying and authenticating the user by their fingerprint, iris, face, and speech, plus a walled-off execution environment in which sensitive stuff like mobile payments can run.

Qualcomm is right now holding its Snapdragon Tech Summit in Hawaii, where it's dripping out details of next year's chips. Here's the product brief [PDF] for the 855. We'll let you know whatever else it reveals during the week. ®