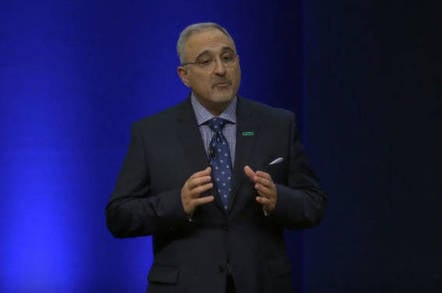 HPE boss Antonio Neri put the wraps on his first year as CEO with another solid fiscal quarter.

The enterprise computing giant closed out its fiscal 2018 with a total of $31bn in revenues, capped by an $8bn fourth quarter of the year.

For the quarter, ending October 31:

For the full year:

"As we close my first fiscal year as CEO, I am incredibly proud of where we stand in the marketplace and of our innovative culture," Neri said in announcing the numbers.

"In 2019, I have great confidence that our experienced global team and proven strategy will accelerate what comes next for our customers from edge to cloud."

At the same time, HPE does have some reason for concern going into the new year. The company noted that revenues in the APAC region were down 5 per cent year over year, and should the US trade war with China escalate with higher tariffs, further problems would arise.

"At 10 per cent it makes no sense to change anything," Neri said of the tariffs on Chinese goods affecting pricing or other business decisions.

"At 25 per cent you have to consider other options."