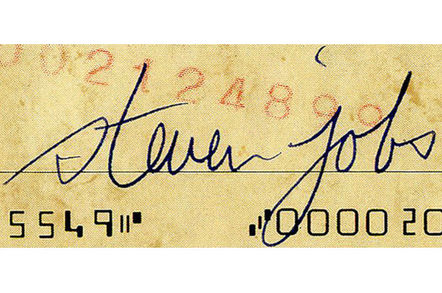 It is official: Steve Jobs, the co-founder of Apple, the marketing demigod, the dream weaver that captured the hearts and wallets of a planet, has the priciest signature around.

This factoid – which seems fitting given the relative recommended retail price of Apple gear – is according to the 2018 edition of Paul Fraser Collectibles PRC40 Autograph Index.

Signatures by the iInventor are "incredibly rare", said the dealer of high-end collectibles. "Jobs was a reluctant signer, always maintaining that Apple was a team effort," said Daniel Wade, head writer at Paul Fraser Collectibles.

El Reg wrote a wonderful tribute to the great man on the seventh anniversary of his death some months back. Allow yourself a moment of contemplation, and perhaps keep a box of tissues nearby, and give it a re-read – assuming you read it first time round.

"Only a handful of genuine Stephen Hawking hand-signed books exist, mostly from the '70s before Hawking's illness made it impossible for him to write. You're more likely to see Hawking's thumb print signatures which are generally far cheaper," said Wade.

The most expensive signature from a person that is still alive is the £2,950 for Paul McCartney's scrawl. Prince William, JK Rowling, Prince Harry and Ringo Starr made up the remaining top five. ®