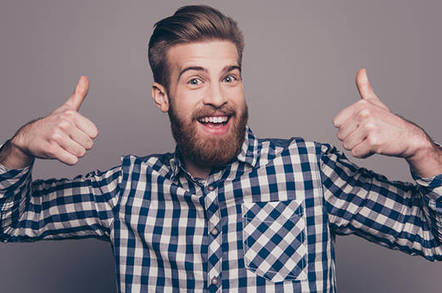 In an exciting first, the autopilot feature in a Tesla car managed to save rather than kill its occupant.

At 0300 PT on Friday, the highway patrol pulled alongside at grey Tesla Model S travelling at 70 miles an hour on a freeway down toward Silicon Valley and noticed that driver – 45-year-old Alexander Samek – appeared to be fast asleep.

So the police car pulled behind the Tesla and flashed its lights and siren in an effort to wake him up. He didn't budge – most likely because he was dead drunk – the police said in a statement he "was placed under arrest for driving under the influence of alcohol."

The officers figured that since the car was following the freeway lanes – rather than the veering and swerving you'd expect if no one was driving – that the Tesla's "driver assist" feature was on and so did a very smart thing: They maneuvered in front of the car and then gradually slowed down, finally coming to a stop in the lane.

The officers then tried to rouse Samek by banging on the window and shouting at him – he eventually woke up at which point they quickly determined he was intoxicated and arrested him. An officer then drove the car off the freeway.

Highlighting just how incredibly lucky Samek is to be alive, back in March, a Tesla autopilot was responsible for killing its sober and conscious driver when it got confused and accelerated into a barrier when the same highway split.

That deadly crash was only four miles from where Samek was pulled over – and he would have reached the exact same spot three minutes later if the cops hadn't intervened.

Of course, this being Tesla the fact that the car continued to zoom along the freeway with an unconscious occupant was painted by CEO Elon Musk as a great thing.

So safe, so safe

The company itself says that the system is supposed to check for constant signals that the driver is capable of intervening – something that seems very unlikely given that a police car's lights and siren weren't enough to rouse its occupant.

But the Tesla fanbois were out in full force. "This is actually pretty amazing Marketing for Tesla. No one died and the autopilot works. Cool," tweeted one, prompting another to respond: "Idea @elonmusk for Autopilot: if the AP can detect whether or not if a driver is conscious then pull over and use hazard lights, send a signal to police or EMTs. Also make AP able to detect if police are trying to pull you over."

Which in turn prompted the publicity shy CEO of Tesla to tweet: "Exactly. Default Autopilot behavior, if there’s no driver input, is to slow gradually to a stop & turn on hazard lights. Tesla service then contacts the owner. Looking into what happened here."

Which is, of course, not what happened. The cops say they had to force the car to slow down by getting in front of it and making it slow down by putting themselves and their vehicle in harm's way.

In Musky World, however, the system yet again worked perfectly. Like when a Tesla slammed into a stationary firetruck at around 65mph on Interstate 405 in Culver City, California. Or when one crashed into a parked police car in Laguna Beach, also in California. Or when Joshua Brown was killed in Florida after his Tesla crashed into a truck. Or when one ended up on its roof in a swamp in Minnesota. Each time Autopilot was involved.

We've asked Tesla for comment on this matter and will update as more details come in. ®